Gold prices opened lower this morning, falling for a second session as the yellow metal came under pressure from pre year-end profit-taking selling and a stronger US dollar.

A larger than anticipated drop in US durable goods new orders failed to dent the greenback as the decline was largely defined by a fall in transportation equipment orders and the core durable-goods orders component actually showed a 2.6% rise last month, lending traction to the perception that the expansion in the US manufacturing sector is alive and reasonably well.

Meanwhile, core inflation remains a virtual no-show, at the paltry 0.8% level as last reported this morning by the US Commerce Department. Nevertheless, commodity price inflation is starting to make an appearance on…corporate balance sheets (something to worry about down the road).

Additional US economic data showed that weekly unemployment claims continued to edge slightly lower (the latest tally indicates 420,000 filings last week) after having hit a peak of 504,000 in early August (a level which some believe was the trigger that tilted the Fed into full QE2 mode). November’s tally showed filings numbers closer to 410,000 — a two-and-a-half-year low point in such claims, but not yet the 400,000 (or below) target that economists feel would decidedly alter the jobs scene.

Spot gold bullion was initially indicated at $1,378.00 per ounce — a loss of $7.00 that was the result of the aforementioned book-squaring and dollar background situation. Subsequently, the precious metal eased to under $1,373.00 as the US currency neared the 80.80 level on the trade-weighted index. The greenback picked up additional ‘steam’ following the reporting of a 5.5% gain in November US new-home sales and the rising to the 74.5 level of US consumer confidence figures.

Last week’s incursion to support levels near the $1,360.00 in gold has not yet shown signs of being repeated, and for the moment, the flow of rabidly bullish 2011 price forecasts continues unabated. As record or near-record gold prices make headlines, it is also important not to lose sight of certain other price tags associated with this human obsession. Consider the situation in Tanzania, as reported by Bloomberg’s Cam Simpson.

One angle which has not yet been mentioned in the list of factors that might "change" the accuracy of such uber-positive crystal-ball-gazing efforts is the concept of portfolio re-balancing. A recent interview by Jeremy Glaser with Morningstar’s head of ETF Research, Scott Burns, touches on the subject matter and gives some…food for thought (aside from the startling revelation that the gold ETFs show an average holding period of about 20 days; meaning that there is a significant amount of trading and people moving in and out of gold as an investment in these funds).

Anyway, Jeremy asked Mr. Burns what might cause a decline in gold as we look ahead, given the strong bids that the metal has received for quite some time now, due to uncertain global conditions. Mr. Burns responded:

"So, I have a, what I think is a little out of the box theory on what will burst the price of gold and I think what we’ve seen over the past three to five years is that gold has really started to appear in a lot of asset allocation models and gold is actually the best performing asset class for the past 25 years. A lot of people don’t realise that even the fact that for 20 years it was one of the worst, how it’s performed in the past five relative to everything else has really pushed it up.

Well, the frothiness of gold right now, on the gold prices right now and the amount of, I think, this is what was so eye-opening about those trading stats, the amount of trading and technical trading that’s happening in gold. When you get that natural kind of selling reaction of rebalancing, you may actually trigger false signals to the technical analysts that there is now a run on gold and once the people start — once the herd starts running for the gate, that’s the kind of thing, especially in something as frothy as gold that could really start to trigger this downhill unwind of gold prices.

So it will be interesting to see how these long investors who have helped I think prop up the price of gold, when they start to do their natural rebalancing what kind of effects that triggers unintentionally in the secondary market. Of course that also puts a nice bottoming too because then they’ll see the 5% and 10% allocation are now 3% and 8% and have to do the rebalance the other way."

Palladium might soon be on many more investors’ minds as the US Treasury (via the Mint) is getting ready to let the new American Eagle coin take flight. You can read all about it here, courtesy of Kitco News’ intrepid reporting by Daniela Cambone. Rhodium dropped $10 to the $2,390.00 level. Thinning participation will continue to generated out-sized moves for the remainder of the day, thus, spectating might be the safest "sport" at this juncture.

At this point, the time has come to wish you, our loyal readers, and your families, the Happiest of Holidays and a warm, restful, and joyous hiatus in the days ahead!
We leave you now with one holiday tree that needs no decorating. At all. 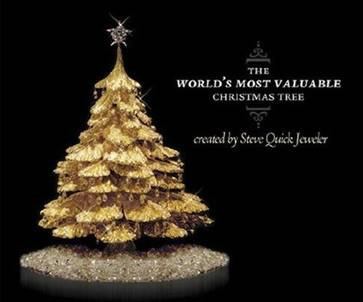 Half a million dollars’ worth of gold and diamonds should suffice to make this tree the ‘ultimate’ one. The precious tree is being auctioned on eBay (proceeds to the American Cancer Society) but — if out of your budget — you can also acquire a 14K version for a mere $195.00 American.

CoinNews.net - December 1, 2022 3
Precious metals rallied in their start to the new trading month of December. Advances ranged from 1.5% for platinum to 4.9% for silver. The...