US Mint circulating coin production figures plunged in November 2010, falling to their worst level since April according to the latest data published by the agency. 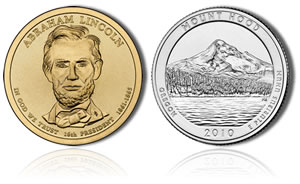 In other revelations, the US Mint provided mintages for the Mount Hood National Park Quarter and the Abraham Lincoln Presidential dollar.

If weakened coin demand is an indicator of a lethargic economy, which it has been in the past, Americans can look forward to continued economic pain if the latest US Mint trends continue.

Previous October levels had snapped a string of three straight monthly declines that followed a peaking June when nearly 920 million coins were minted. But November 2010 coin production dived by almost 200 million from October, making it the fifth worst month this year with just over 531 million coins manufactured.

6,292,910,000 coins were minted between January and November. Doubling last year’s 3.5 billion run, which was the lowest in decades, is now in jeopardy. Still, the annual pace is at least tilting toward higher numbers that were last seen in 2008.

For the first time since February, the US Mint reported making only three types of circulating coins during a month. Totals were lifted for Lincoln cents, Jefferson nickels and Roosevelt dimes.

The US Mint in Philadelphia was busier than Denver overall and for the first time in three months. But not by much. The shifts look to be an ongoing plan by the Mint to have relatively equal mintage splits between facilities by year’s end.

What was reported as preliminary mintages in October for Mount Hood quarters and Lincoln Presidential dollars turned out to be the final figures published in November — although there is a small chance the Mount Hood quarters could rise in December with bulk quarters purchases.

The Lincoln Presidential dollars launched into circulation on November 18. The US Mint produced 97.02 million in total. Split between Denver and Philadelphia, mintages came to 48.02 million for 2010-D Lincoln dollars and 49.0 million for 2010-P Lincoln dollars. Their mintages are the highest since the 2009-D Harrison dollar, which was the inaugural release last year.

Mount Hood quarters were released into circulation on November 15. They are the fifth issue in the debuting America the Beautiful Quarters® Program. The US Mint reports even coin production levels of 34.4 million between both Denver and Philadelphia, for a total of 68.8 million. The 2010-D Mount Hood quarter comes in second for least produced in Denver this year. The 2010-P Mount Hood quarter also has the second lowest mintage of any Philadelphia struck 2010 quarter.

How much did minting all the 2010 one cent coins add to the deficit? I hope they start making the one cent coins out of a cheaper metal soon so the mint can save $$$.

RE: 2010 Union Cents…if I did the math correctly, and moved the decimal point inwards two places…it looks like face value alone is over $395 MILLION DOLLARS…just in CENTS !!!! 2010 US Census projects 308 million people living in USA..figure how many cents are already floating in circulation, it’s mind boggling. Why did the Mint feel it so important to produce this many new cents with the current economic issues all tax payers are facing?? You are right about the metal issue, but pretty soon inflation will force us to round up to the nearest dollar, making fractional coinage a… Read more »