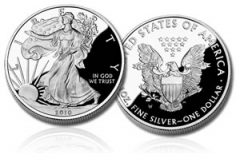 The initial email indicated that their product had been placed on back order. The second email was more dire, alerting that their order was canceled as the product had sold out.

The Mint later confirmed that approximately 100,000 orders were impacted by the snafu. On Thursday, Mint employees mobilized and notified customers with a third email revealing that the back ordered and subscription items canceled were an error. They indicated that they were working on a resolution to the issue, and sincerely apologized for the "confusion and inconvenience."

The Mint sent out a fourth email Tuesday, again apologizing and reassuring customers that their 2010 Silver Eagle Proof orders were reinstated. That body of that email follows:

This e-mail is a follow-up to the one you received last week which erroneously indicated that the United States Mint canceled your order for certain products. Since sending that e-mail, we determined that the erroneous e-mail was not due to a computer glitch. It was our fault, we take full responsibility for it, and we apologize again for any inconvenience and confusion that it may have caused.

The United States Mint took this issue very seriously. Our employees worked diligently throughout the weekend, and we are now confident that we have corrected the error by reinstating all affected orders. Additionally, we have taken measures to ensure that this type of error does not happen again. Accordingly, you will be seeing the normal flow of communications from the United States Mint associated with the fulfillment of your order.