Another overnight period of broad ranges and of pre-guessing the US Fed unfolded in the precious metals complex, most of it being subject once again to the fluctuations in the US dollar. Gold prices traded with the $1,335 – $1,355 channel, silver saw a near 50 cent range and platinum and palladium also swung within $20-$30 spans. At opening time on Friday however, the complex was broadly higher despite a 0.30 gain in the greenback on the trade-weighted index.

Gold spot prices opened with a $4.00 per ounce gain and were quoted at $1,348.10 as against the 77.55 mark reached by the dollar on the index as the Kitco Gold Index showed that this time around predominant gold buying was the prime moving agent in the price equation. Pre-weekend book-squaring and attempts to retrace some of last week’s near 3 percent pullback were also cited as catalysts for the opening moves. While book-squaring-induced ‘paring’ could come into the picture later in the day, the initial trends showed sufficient levels of dollar-bearishness still at work in the markets.

Silver spot prices were ahead by one dime on the open, quoted at $24.13 on the bid-side, while platinum gained $8.00 to open at $1,697.00 and palladium rose by a hefty $13.00 (1.7%) to start the final session of the week at $637.00 per ounce. The imminent IPO by General Motors reveals an automotive giant (bankrupt not that long ago) that is preparing for a bright future by investing in the development of smaller cars and is making plans to hire workers while getting rid of debt.

Friday’s markets were eagerly awaiting US GDP and consumer sentiment data but, to be fair, most of the ebb and flow in trading sentiment was still being dominated by one overriding preoccupation; that of what the Fed might (or might not) announce on Wednesday.

GDP data revealed that US output grew at a nearly 18% faster pace in Q3 as the fallout from improving consumer spending helped cement the vigor in the on-going recovery process. Output in the nation’s various economic enterprises rose by 2% during the quarter (as against the 1.7% recorded in Q2) and albeit it was still shy of the levels needed in order to make a sizeable dent in the joblessness picture, the gain was underscoring the return of that nearly-extinct species at the local mall in recent quarters; the American shopper. Spending among US consumers (whose household purchases still make up nearly 70% of the American economy) rose by 2.6% in the period, making it the strongest such gain since Q4 of 2006 (just before the ‘good old days’ came to an abrupt halt).

The GDP numbers (at least initially), had an opposite and counterintuitive effect on the US dollar and helped bullion advance a bit nearer to the $1,350.00 mark in another manifestation that players expect that nothing short of spectacular economic recovery data will temper the Fed’s accommodative stance and the size of the ‘package’ it may intend to deliver next week. In today’s case, a GDP rising by 2% is seen as still anemic enough to virtually guarantee that which the markets have already factored in ahead of next week’s US central bank meeting.

The one feature of the Commerce Department’s report of the US economy that was most likely being zeroed in upon by the spec trade this morning was, evidently, the finding that US inflation cooled amid this still-rising growth trend (as reflected in price cuts at, say, Wal-Mart). Falling inflation is what is obsessing the Fed, and falling inflation is what is intends to combat with its second round of accommodation. By the time the 9 o’clock hour rolled around in New York, the US dollar was only ahead by 0.05 on the aforementioned index.

Meanwhile, the reality "on the ground" is that most Americans have no conviction in the fact that their President has done something to help the economic expansion. A Bloomberg national poll conducted just days ago shows that twice as many folks believe that Americans’ taxes have risen, that the US economy has shrunk, and that TARP money will never be recovered (a sentiment status quo 100% at odds with the facts). Going into voting booths with that mind-set might make for a wild and woolly Tuesday, next week.

The facts are that the Obama administration has cut (mostly middle-class) taxes by nearly a quarter-trillion dollars, that the economy has reversed course from negative-GDP conditions and (as seen in the numbers this very morning) is growing rather than shrinking, and that the two year-old TARP program (some $245 billion to rescue the financial system alone) has not only been largely recovered but might net a $16 billion profit for Uncle Sam. What we may have here is a classic case of cognitive dissonance on the part of the American public. Learning something that contradicts that which one already thinks they know, leads one to resist new facts and makes them less accommodative (to say the least).

Since it is Friday, and just a couple of days before Halloween, let’s look for one moment at this cognitive dissonance ‘thing’ and how it relates to all things scary (whether total TEOTWAWKI or the American economy or the state of the nation). The concept was first delved into, around 1957, by Leon Festinger and associates. The team conducted a participant observation study of a cult which believed that the Earth was going to be destroyed by a flood. What happened to the cult’s members — particularly the really committed ones who had given up their homes and jobs to work for the cult — when the flood did not happen, was the focus of the Festinger team’s findings.

It turns out that while certain "fringe" cult members were more likely to come to recognize that they had discredited themselves and they then ascribed the whole thing to "experience”, those among the most committed of cult members ended up re-interpreting the evidence (no flood) and ended up claiming that they were right all along (i.e. that the Earth was not destroyed because of the faithfulness of the most devoted cult members). Those of you familiar with the emotional displays that are omnipresent in various precious metals forums (whether about price prospects, manipulation theories, and similar) might just recognize a good dose of cognitive dissonance when you see one.

All that said, Prof. Nouriel Roubini pulled out his scariest Halloween-flavored scenario for the USA this morning. Mr. Roubini — in a Financial Times commentary — did allow for the fact that the US monetary stimulus avoided a Thirties’ style Great Depression. However, the Professor fired a big salvo in the Fed’ direction by stating that the QE to come will have no noticeable effect on US growth next year.

He then went one step further, and opined, that, with the possibility of fiscal reform going bye-bye (should the Republicans take ‘control’ next week), the US faces the risk that ‘something on the fiscal side will[eventually] snap." In so many words, Mr. Roubini spooked FT readers with the (not unlikely) prospect of a US-turned-Japanese period ahead. A period possibly complete with stagnation, deflation, and continuing high joblessness. They do not call the man "Dr. Doom" for nothing.

Certain cults are now preparing for stating that they were ‘right’ — should Dr. Roubini’s scenario come to pass, as are others, who will then claim the same exact thing ("we knew it!") when and/or if the scary forecast does not materialize.

We are preparing to don zombie costumes and chalk it (the weekend that is) all up to ‘experience.’ Enjoy. 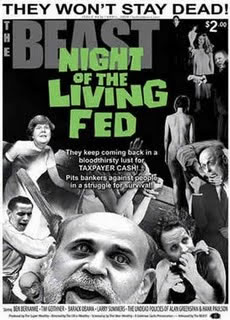 gold looks like headed to break the new all time record high again. hopefully it will break the $1,400.00 soon.