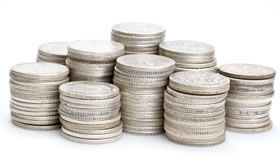 As of Thursday, silver has gained $7.50, or 44.1 percent, since the end of 2009, lifting intrinsic values of old coins containing the precious metal to astonishing new levels. Examples include the 1964 Roosevelt Dime and 1964 Kennedy Half-Dollar which have seen their silver melt values surge to $1.77 and $8.66, respectively.

Even non collectors will hoard old coins found in circulation because they know their values can be worth much more than the denominations stamped on their faces. Most realize buyers will pay premiums depending upon their rarity and condition. However, what casual coin hoarders often do not realize is that many older coins do not have significant worth to collectors, but they do contain 90% silver which makes them very valuable nonetheless. Often referred to as "junk silver coins" by those in the hobby, these 90% silver coins can command more than a pretty penny — especially in today’s silver market. Those who have stashes of old junk silver coins can find themselves in possession of newfound wealth.

To exemplify this point, the chart below shows the intrinsic or melt values of twelve older United States coins based on the London Fix price of $24.49 an ounce on October 14, 2010. For comparison, it shows where these coins stood at the beginning of the year when silver was $16.99 an ounce.

Keep in mind the numbers shown above are based on the weight of the coin when struck and does not take into account any wear which may have slightly lowered the amount of silver contained within the coin. Also, it is a good idea to always do a reality check on your collection as numismatic values of a strike routinely outpace the intrinsic value.

To discover current melt values of older coins and by country, see the CoinNews.net pages:

What scares me is the number of people who will simply take a pile of old coins to one of those “we buy silver and gold” places and dump them on the table. They’ll be lowballed for the scrap stuff and/or lose a bundle when the owners pull out the good stuff but pay 10x face. I’ve seen a number of consumer reports that tested many of the most heavily-advertised buying services and found most of their offers to be unjustifiably low, even allowing a decent overhead and profit margin.

so if I do have silver I want to sell, where should I go?

If I had a small hoard of silver coins that I wanted to sell. I would list them on ebay ~ auction style for 7 days. They will get bid up to a fair price !