The United States Mint on Thursday, September 30, 2010, placed the James Buchanan Presidential $1 Coin Cover on sale at a price of $15.95. 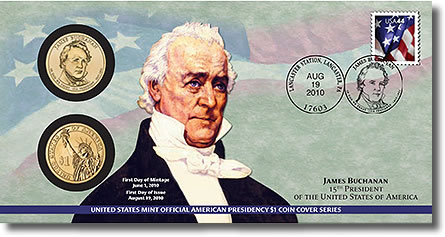 The 32,000 limited-edition product is the third of four 2010 releases in the American Presidency $1 Coin Cover Series and the fifteenth since the covers were introduced for the Presidents in 2007. The covers were priced $1 less prior to 2010 and had a higher authorized production of 40,000.

Each cover features two James Buchanan Presidential dollars. Both are from the first day of production, which was on June 1, 2010. One coin is from the U.S. Mint’s Denver facility and the other is from Philadelphia. The $1s coins are framed within a display card featuring a portrait of the President. 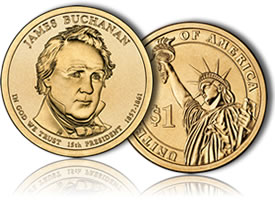 The card also includes a 44-cent Flag postage stamp with a postmark of August 19, 2010, Lancaster, PA. That is the date the dollars were released into circulation and also when the Mint began offering them in $25 rolls.

The obverse or heads side of the $1, designed and sculpted by Phebe Hemphill, features a portrait of Buchanan and the inscriptions "JAMES BUCHANAN," "IN GOD WE TRUST," "15TH PRESIDENT" and "1857-1861."

The following is a brief biography of Buchanan, provided by the U.S. Mint when the $1 honoring him was first released.

Buchanan, the 15th U.S. President, was born on April 23, 1791, near Mercersburg, Pa. He was the oldest of 11 children. After graduating from college, Buchanan studied law and began a successful law career in 1812. During the War of 1812, he helped defend Baltimore against British attack.

Buchanan, a gifted orator, became a state legislator, and later served as a member of the U.S. House of Representatives and Senate, and as U.S. minister to Russia. In 1845, he became President James K. Polk’s secretary of state. His later service abroad as U.S. minister to Great Britain helped insulate him from the growing domestic controversy over slavery, which was reaching a crescendo by 1856, helping him secure the Democratic Party’s nomination for President.

Two days after Buchanan was inaugurated, the U.S. Supreme Court issued the controversial Dred Scott decision, which effectively legalized slavery in all U.S. territories. The decision was another factor that propelled the Nation toward civil war.

As mentioned, the James Buchanan $1 is the 15th coin released in the series honoring U.S. Presidents. It is the third for 2010 and follows the Franklin Pierce coin that was launched into circulation on July 1, 2010. The next coin features Abraham Lincoln, which will launch on November 18, 2010.

To date, the Buchanan dollars are the scarcest in the series, with just over 73.3 million minted.

Order Coin Cover from US Mint

Orders may be placed through the 2010 President Franklin Pierce:

Rolls of the dollars are available directly from the Mint as well. They are available through specially Mint-wrapped $25 rolls containing either Denver or Philadelphia minted strikes for a price of $35.95, plus shipping and handling.

[…] James Buchanan Presidential $1 Coin Covers appear in the sales tables for the first time this week, having just been released Thursday, September 30, 2010. Four-day orders totaled 16,220, which continues a trend of lower opening sales as compared to previous debuting figures for the series: […]

I would like to know the worth of this coin

What is the value gold tone $1.00 coin James Buchanan ?