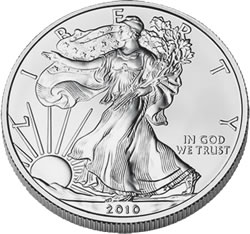 The July 20 Congressional subcommittee hearing about the "The State of U.S. Coins and Currency" brought forth an interesting topic to the world of investing and numismatics — an idea for the United States Mint to produce American Palladium Eagle Bullion Coins.

The topic was not discussed to the same degree as changing coin compositions or producing proof American Silver Eagles at the expense of the bullion versions. However, it tied into the latter as a partial solution one panel member proposed to help alleviate the current American Silver Eagle crunch.

Mr. Michael B. Clark, President of the Diamond State Depository, a subsidiary of Dillon Gage Group, Inc. and one of the U.S. Mint’s twelve authorized purchasers of American Eagle Silver bullion coins, made these comments during his testimony at the hearing:

Clark continued later on to state, "A one-troy ounce palladium coin would offer the precious metals investor an interesting price point for market entry. While gold presently trades around the $1,200 level, and platinum over $1,500, palladium is trading in the spot market in the range of $460 – $475."

Palladium coins are not new to the world of numismatics. A brief look at history shows that several countries started striking some form of a palladium coin decades ago. However, most of these were commemorative in nature. Canada had been the only country to strike a palladium bullion coin when it introduced the Palladium Maple Leaf back in 2005. Unfortunately, demand for the strike waned after it first became available and it was discontinued in 2007. The coin did make a return last year, however, when the Royal Canadian Mint perceived a renewed interest in the unique bullion product.

Some in the United States Congress have also been seeking a palladium coin for at least two years now. Representative Mike Castle from Delaware introduced legislation back in 2008 for the U.S. Mint to strike ultra high relief palladium coins featuring the Augustus St. Gaudens design first seen on the 1907 $20 Gold Piece. (This same design was also featured in 2009 on ultra high relief gold coins struck by the U.S. Mint.)

Despite passing the House unanimously, no action was taken by the Senate leaving the bill to die. A few more attempts have been made since then, but they have also failed to gain any traction.

In response to a question by Chairman Watt of the subcommittee as to if the introduction of the palladium coin would have an impact on the Mint’s "undersupply" of eagles, Michael Clark had this comment:

"We do believe it is an ideal price-point for many investors," commented Michael Clark. "As a result of producing a palladium coin, we believe it would have the effect of reducing the burden on the Mint for Silver Eagle production."

No further action on the palladium bullion coin was taken by the committee at that time, but it does leave open the possibility of the Mint being directed to strike the coin in the future.

[…] for many, as of late, especially with the recent proof gold and silver eagle discussions. Recent testimony in Congress inferred that if Palladium Eagles were struck, it would offer precious metal investors another […]