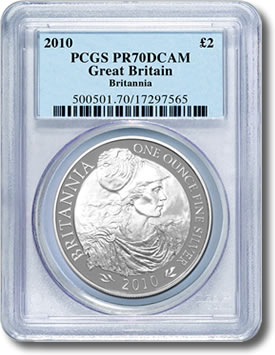 This 2010 silver £2 Britannia, graded PCGS Proof 70 Deep Cameo, was one of the first coins certified for The London Coin Company during the first week of operations at the new PCGS European grading center in Paris, France in June 2010. – CLICK TO ENLARGE

By the end of the week, PCGS’ numismatic experts had evaluated thousands of rare and modern commemorative coins from French, German, Italian, Greek and British dealers and collectors.

The dealers were extremely pleased with this new, convenient setting. More and more dealers and collectors are recognizing that impartial, third-party grading (evaluation) by PCGS will help their coins realize their true worth in the marketplace. The Paris office finally allows them to benefit from PCGS grading more easily and in a less-costly way.

Michael Creusy of ABC Numismatique in Lyon, France, expressed his appreciation: "Thank you, PCGS, for having made this marvelous grading service so easily available to all Europeans."

Because of this overwhelmingly positive reaction, PCGS is preparing for an even bigger workload when the grading team returns to Paris. The next big grading week begins on September 13th, 2010. 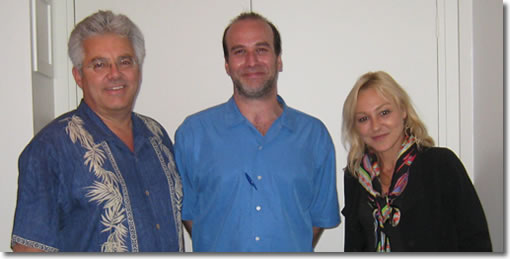 "By establishing its EU grading center in France, PCGS has eliminated the need for European collectors and dealers to send their coins to the U.S. for grading and authentication. All submissions from within the EU are now made directly to the Paris office through PCGS’ network of EU Authorized dealers," explained Muriel Eymery, Director of International Business Development at PCGS.

Dr. Josef Fischer of Emporium Hamburg in Hamburg, Germany, shared his opinion: "The PCGS grading in Paris was an excellent experience. It was easy to ship there and we got very quick service; turnaround times are much shorter than shipping to the USA with customs clearance and so on. Grading in Europe will make PCGS better-known and more appealing for European dealers and collectors." 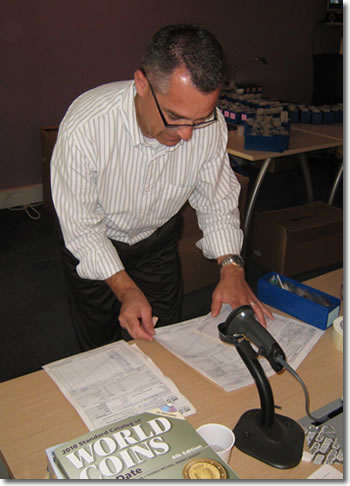 PCGS Operations Manager Anibal Almeida reviews a submission form while processing one of the thousands of coins certified in June 2010 at the new PCGS European grading center in Paris, France.

PCGS President Don Willis is encouraged by the dealers’ responses. "The convenience of a central Paris location makes getting coins authenticated and graded by PCGS easy for EU dealers," he said. "Coins received on Monday and Tuesday are returned graded on Thursday or Friday of the same week. The dealers appreciate our commitment to serving them."

Ingram Liberman of The London Coin Company in London, England expressed his approval of PCGS services: "Why have we chosen an American (coin grading) company rather than a British one? The main reason is that PCGS is the most respected of all the coin grading companies in the world and truly impartial. The future is bright for the future of grading." 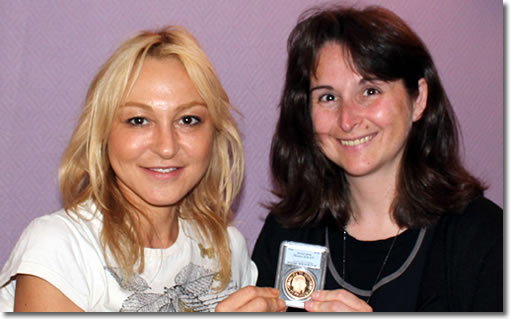 "PCGS’ competency, efficiency and speed are now available to everyone," Philippe Saive of Saive Numismatique in Metz, France added. "By establishing a grading center in Europe, PCGS brings along its savoir-faire know-how. It is a very good thing for the future of numismatics in France as well as in all of Europe."

Takis Syvridakis of Collector’s Shop International in Athens, Greece, wrote: "I and my business partners are very pleased with PCGS and the opportunity to provide our customers with a higher level of quality and value for their purchases."

And Marco Ranieri of Numismatica Ranieri in Florence, Italy, simply added, "Thank you a lot, PCGS. I hope you will expand in Europe very quickly."

Since 1986, PCGS experts have authenticated, graded and certified nearly 20 million coins from around the world. These coins have a total declared value of over 20 billion US dollars. PCGS is a division of Collectors Universe, Inc. (NASDAQ: CLCT).

To make an appointment for PCGS’ next grading sessions or to obtain more information, EU dealers can contact the Paris office at info@PCGSglobal.com or by calling Muriel Eymery at 33 (0) 1 40 20 0994. Additional information on PCGS is available in English and other languages at www.PCGSglobal.com.

I have a question, about 10 years ago I bought a (1909 s vdb graded MS67 red. This coin was bought over an ebay silent auction, with the president of ebay and the president of the auction company present. The coin being bought by way of an auction I would think this to be a genuine coin without any alterations of any kind, it is the only coin that I have that was not graded by NGC or PCGS it was graded by NTC. After having it regraded it came back again as MS67 red, but then after having it… Read more »