Appearing as the third proof issue from the Perth Mint of Australia in its internationally acclaimed Australian Koala Gold Coin Series is the 2010 Koala Gold Proof Coin. 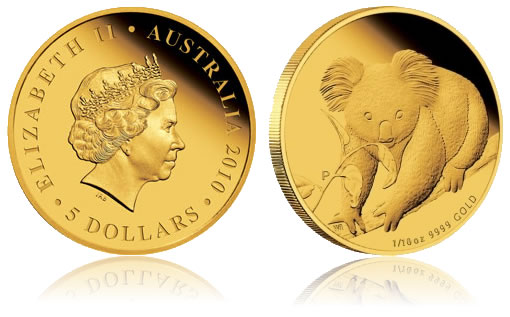 Koalas have long appeared as an iconic symbol for Australia along with their other famous marsupial, the kangaroo. Together, the creatures have graced strikes of the Perth for years, but the Proof Koala Gold Coin only made its debut in 2008.

Koalas are unique to Australia and spend most of their lives high up in the Eucalyptus trees eating vast amounts of leaves. These leaves are toxic to most creatures but the koalas have adapted. Unfortunately, they had a harder time adapting to the intrusion of man and were hunted almost to extinction for their fur before a law was created to prevent their destruction. 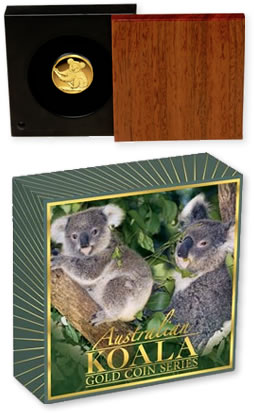 Of note, the 1 oz coin is struck in high relief on a thicker blank to allow for greater detail.

Each coin is considered legal tender under the Australian Currency Act of 1965 and contains a portrait of Her Majesty Queen Elizabeth II of England on its obverse. The portrait is the work of Ian Rank-Broadley.

The annually changing reverse design this year features a young koala clinging to a small tree branch as it eats the gum leaves. The historic ‘P’ mint mark is also seen on the reverse along with the coins size and "9999 GOLD." Wade Robinson is the artist of record for this koala design.

The Perth houses each coin in a custom luxury presentation case with a jarrah timber lid. They are then shipped with a numbered Certificate of Authenticity in an illustrated shipper.

The 1/10 oz and 1/25 oz Koala Gold Proof Coins are available directly from The Perth Mint via this CoinNews affiliate link:

The larger 1 oz and 2 oz coins are only available from Perth Mint authorized vendors.

I would like to collect 2010 Australian Koala Gold Proof Coins from Perth Mint. Since Perth Mint issued first Platinum Koala Proof Coins back in 1987, I think that Gold Koala Coins are very good too!