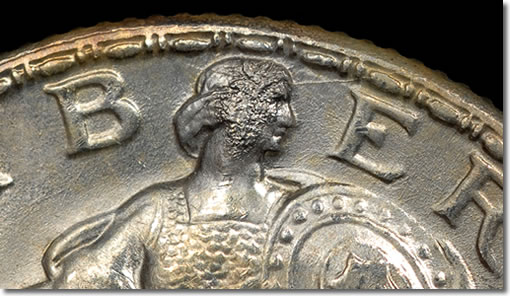 This detail image of a "doctored" Standing Liberty quarter shows the decomposition of soft metal that was applied to the coin and shaped, apparently with a jeweler’s engraving tool, to simulate a "Full Head." (Photo courtesy of PCGS.)

PCGS announced that it has a process in development which will detect any foreign substance on a coin’s surface, and also announced a major lawsuit filed against alleged coin doctors.

According to PCGS officials, in conjunction with the development of coin recognition technology launched in March of this year, PCGS has been developing a process to detect foreign materials and other enhancements to a coin’s surfaces.

Using energy dispersive X-ray spectrometry (EDX), Fournier Transform Infra-Red Spectral analysis (FT-IR), Raman Spectroscopy and other similar analytical techniques, this detection process (code-named by PCGS, the PCGS Coin Sniffer™) will analyze the surfaces of a coin in a matter of seconds to detect foreign substances and provide quantitative information about the coin.

"Coin doctors" often apply numerous materials to the surfaces of coins to conceal problems with the coin, and/or alter the surfaces to improve its appearance in an attempt to artificially increase its value. The simultaneous alloy determination will further aid in the detection of counterfeits as an additional benefit.

David Hall, cofounder of PCGS and President of its parent company Collectors Universe, Inc. said, "When we launched PCGS Secure Plus featuring coin recognition technology we stated that it was just a first step in improving grading and battling coin doctoring.

The PCGS Coin Sniffer™ is the next significant development in our ongoing efforts. When combined with our existing PCGS Secure Plus service, this new process will make it extremely difficult for altered coins to go undetected."

"This new process is somewhat similar to what we often see as we are going through security at an airport," said Don Willis, PCGS President. "We have already filed a patent which covers the methodology and unique techniques we are using for processing coins. The new PCGS Coin Sniffer™ process will be integrated with the help of our partner CoinSecure, Inc into the PCGS Secure Plus service and will be available at no additional cost. Our targeted production implementation is this year, although we will be conducting live testing much before then."

Additionally, Collectors Universe, Inc. (NASDAQ: CLCT), the parent company of PCGS, has filed a Federal Court suit in United States District Court, Central District of California, against several individuals claiming they engaged in a pattern of racketeering activity, breach of contract, conspiracy, unfair competition and fraud for allegedly submitting "doctored" coins to PCGS for grading on multiple occasions for a period of years.

The suit claims the dealers violated federal laws, including the Lanham Act involving interstate commerce and RICO racketeering statutes, and also alleges "unlawful, unfair and fraudulent business practices" for submitting coins that were deceptively altered in an attempt to increase their value.

The Complaint states: "Defendants knew that these coins had been ‘doctored,’ by themselves and/or other persons engaged by them for that purpose.

Their methods included lasering the surfaces of extremely rare proof gold coins to remove surface imperfections, building up commonly-worn or weakly-struck portions of coins, and other physical and chemical processes.

Defendants represented to PCGS that these coins had natural surfaces, intending to deceive PCGS’s graders so that the ‘doctored’ coins would be certified by PCGS and then sold in the rare coin marketplace."

As many as 10 other defendants could be added to the Complaint. Collectors Universe is suing for triple damages as well as all profits made through these deceptive submissions.

"Every owner of a PCGS coin should be confident in the fact that PCGS stands behind its product guarantee 100%. Over the past 24 years PCGS has paid over $7 million under its guarantee program for coins which have developed some type of problem due to coin doctoring or some other issue," said David Hall.

"Occasionally our graders have been deceived by the very clever application of foreign substances only to have these substances eventually spoil the coin and necessitate our buying it back.

We believe we have compelling evidence against several individuals who, working together and separately, have made a business out of this practice. We hope the courts will provide a suitable remedy to this problem."

"We firmly believe coin doctoring to alter a coin’s appearance is clearly illegal under the law," Hall continued, "and we know that it often ruins coins long term and certainly deceives grading services and future coin buyers. Today’s announcements of the development of scientific doctoring detection and also the lawsuit filed against alleged coin doctors is another big step in this process, but we will not be finished until we eliminate this unsavory practice once and for all."

PCGS is a division of Collectors Universe, Inc. (NASDAQ: CLCT)

I find this article very interesting, given the fact that PCGS themselves are known to clean coins utilizing ultrasound and etchants and then certify a standard grade without notifying the customer. Who, quite frankly is in charge minding their inappropriate business practises?

@Chris:
Do you have some links to something that would substantiate PCGS is defrauding its customers?
That’s a pretty serious charge.