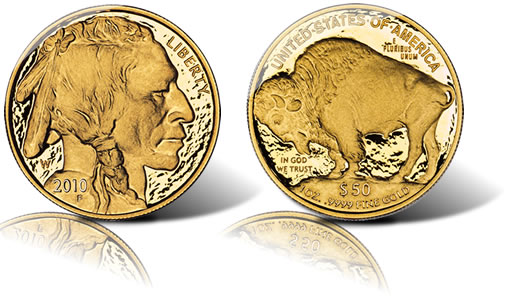 While a price point for the coin is not yet available, the U.S. Mint said in a press statement that the 24-karat gold piece would be released on June 3, 2010, at noon Eastern Time.

The date is not a surprise. Earlier this month the Mint revealed the day by adding it to a notification page on its online store. But the press announcement sets its release in virtual stone. Also, it indicated that there would be no household order limits in place. Buyers can order as many as they want.

The release is exactly five weeks behind the bullion version’s April 29 launch, which kicked off with lustrous opening day sales of 48,500.

Unlike the proof that is specifically struck for collectors, the bullion American Buffalo is intended for the investor community. Buyers have purchased 127,000 of them to date.

The proof version is also different in how it is priced and distributed. The coin is sold directly by the U.S. Mint to the public, with its price fixed weekly — it can change once every Wednesday or Thursday based on how gold prices have moved during the prior seven days. If the London gold fix average remains between $1,200.00 – $1,249.99, the Buffalos will open at a price of $1,510.00.

The Mint sells bullion Buffalo coins only to its small network of authorized buyers, who in turn resell them to the public for a small premium over the current spot price of gold.

When available, the 2010 American Buffalo Gold Proof Coin can be purchased directly from the U.S. Mint online product page.

It’s all coming crashing down. Everyone needs food and water. Be prepared….

Better get them quick. These prices probably won’t be here for long.