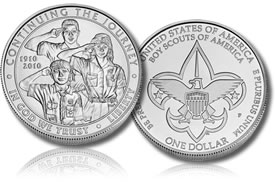 Now that the United States Mint uncirculated 2010 Boy Scouts of America Centennial Silver Dollars have officially sold out, most would expect that their interest on the secondary markets would increase. Apparently, at least for now, that is not the case.

Buyers still seem attuned to the proofs that have been favored by a more than 2-1 sales margin. The latest US Mint figures (as of Sunday, April 25) had 107,292 uncirculated and 223,310 proof sold.

eBay auctions reveals that collectors appear unwilling to fork over significant premiums for most uncirculated 2010-P Boy Scouts commemorative coins, which up until recently were available directly from the United States Mint for $35.95. (The Mint actually sold the coins at an introductory price of $33.95 when they debuted on March 23, 2010, but raised it to $35.95 on April 22.)

A few dozen eBay listings for the uncirculated strikes were live at the time of this writing. At the cheapest end, ungraded "still in the Mint packaging" coins have Buy-It-Now prices at roughly $10 over their original issue price. Several listings reached $20 higher.

Currently, few potential buyers appear enticed. Reviewing closed auctions since the official sell out last week show only a couple of the ungraded strikes moving, and those for only a few dollars more than the Mint’s selling price.

Graded uncirculated coins also do not appear to be inspiring lifted excitement. MS69 coins had average Buy-It-Now asking prices in the upper $60 range. But in looking at the completed auctions, most have sold for around $40.

As typical, graded MS70s faired the best. Only a few samples of these have been available on eBay, but those have commanded premiums of at least doubled the original Mint issue price. Realized prices of $80 or more dominate. Current prices for several Buy-It-Now options start out at $80 and top around $100.

All values could change significantly in the coming days and weeks, however, when the Mint also reaches a sell-out status on the proof Boy Scouts Silver Dollars. That may happen at a moment’s notice. Less than 20,000 were left as of last week.