Pobjoy Mint is delighted to announce that on Tuesday, April 20, 2010, representatives of the Isle of Man Government and members of the Suzuki GB team, including the famous TT motorcyclist Bruce Anstey, visited the Mint to officially launch a 50 pence coin to commemorate 50 Years of Racing by Suzuki. 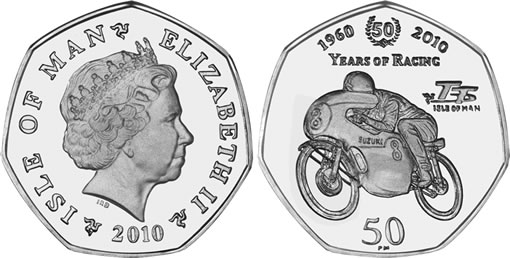 The legal tender coin, issued on behalf of the Isle of Man — home of the annual TT races — is released not only to celebrate Suzuki’s 50 years of racing but also in time for the races themselves, which take place every year on the Island, this year starting on the 29th May.

The first coin was struck by Suzuki rider Bruce Anstey, a renowned road-racer who has won the TT seven times.

The design of the coin depicts an image of a rider below the celebratory dates 1960 – 2010 and the wording, ’50 Years of Racing’ with the Suzuki Crest at the top of the Coin. The design also features the Isle of Man TT logo, which signifies the close relationship between the two organizations.

Approved by Buckingham Palace, the obverse of the coin bears a fine effigy of Her Majesty Queen Elizabeth II by Ian Rank-Broadley FRBS.

The coin is available in Proof Sterling Silver and Uncirculated Cupro Nickel.

This coin will be a delight for motorcycling enthusiasts all across the world. For further information about this coin and the Pobjoy range, please visit www.pobjoy.com.

How long does it take to get an answer please