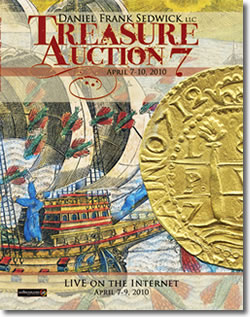 Winter Park, Florida. — Daniel Frank Sedwick, LLC announced this week that their seventh Treasure Auction on April 7-9 realized $1.37 million (including buyer’s fees, same for all prices quoted here) and over 94% of the 2160 lots sold, well exceeding the pre-auction estimate.

"Our latest auction proves that world coins and treasure items are still strong," said Daniel Sedwick, company principal and founder, "and that we achieve consistent results.

This is our second auction in a row that reached over $1 million with a 94% sell-through rate, which is remarkable and a testament to the hard work we put in, both to get great consignments and to do what it takes to sell them all."

Perhaps the most interesting coin in the sale was a Mexican cob 1 escudo from the 1715 Fleet that was flown to the moon aboard Apollo 14, and that coin brought $8,625. Most of the money, however, was in gold and silver ingots, including the highest priced lot in the whole auction, a naturally coral-encrusted "clump" of two complete gold bars from a mid-1500s Spanish wreck that brought $112,125. Many museum-quality artifacts sold for up to 5 times the high estimates.

Sedwick’s assistant Augi Garcia pointed to several unique factors for the success of their auction, including video lot viewing and illustration of all lots, but particularly the concept of live bidding via the Internet:

"People love bidding online, at their computer, in the comfort of their own home or office, even from their iPhone. At times we had more people actively bidding online than you see on the floor of a typical world-coins auction at a major coin show."

A very strong online thrust via the Sedwick website as well as the bidding platform iCollector attracted over 25% new bidders from around the world. Also of benefit was lot viewing at the Baltimore show in March.

Consignments pledged or already received for Sedwick’s Treasure Auction #8 in October (consignment deadline July 31) indicate that it will be another big event, with still more improvements and innovations in store.

"Our goal is constant improvement through technological innovation, while retaining good old-fashioned personal service," says Sedwick, "and that formula is hard to beat."

Highlights from Treasure Auction #7 include (in order of price realized):

Prices realized for all lots sold in Treasure Auction #7 are available online at http://www.sedwickcoins.com/treasureauction7/pricest7.pdf.

How can I found out how much it is worth? Am looking to sell.

Thank you for any assistance you may offer.