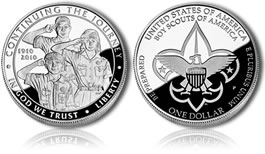 The sales figures have smashed those of the 2010 Disabled American Veteran commemorative that have been on sale for longer, and have topped last year’s opening sales week of the extremely popular 2009 Abraham Lincoln Bicentennial commemorative which eventually sold out.

As Mr. Moy indicated, the commemorative silver coins were made available for ordering on Tuesday, March 23. The Mint ceremoniously launched the dollars on Saturday, March 27, at the National Money Show.

The coins are available in both proof and uncirculated conditions. The introductory price for the proof is $39.95 while the uncirculated option is available for $33.95. Mr. Moy did not reveal how the sales were split between the two. The U.S. Mint generally releases more formalized coin sales figures each week by Tuesday.

While standard in their composition and weight for a commemorative, the Boy Scouts silver dollars are unique in the fact of their subject matter and the swarm of potential buyers. It is estimated that almost 2.8 million youth members alone belong to the Boy Scouts of America (BSA). Add in the million plus adult members and the numbers approach 4 million active participants.

The total allotted mintage for the commemoratives is 350,000. Many collectors expect they will sell out, and the inaugural sales figures are more supportive of the possibility.

The US Mint releases only two commemoratives each year. The first was the 2010 American Veterans Disabled for Life Silver Dollar. The proof and uncirculated coins went on sale February 25, 2010 and are still available. The Mint has reported a combined 166,368 have been sold between their launch and March 21, which — although much less than the Boy Scouts dollars, is a solid number for a silver commemorative. The first reported weekly Mint figures for the 2009 Abraham Lincoln Bicentennial Silver Dollars came in at 177,722.

Customers may order the proof and uncirculated coins at the United States Mint Web site, http://www.usmint.gov/catalog, or at their toll-free number, 1-800-USA-MINT (872-6468).

The Boy Scouts of America Centennial Silver Dollar will be available at an introductory price through April 22, 2010, when it will be offered at regular pricing — $43.95 for the proof and $35.95 for the uncirculated (if they do not sell).

With an order limit of 100 units each per household in effect, to sell out does not indicate the overall individual interest in the coin itself. Most likely coin dealers and other entrepreneurs are buying their full limit, plus some, hoping to cash in on the almost 3 million potential buyer latter. Unfortunately my prediction is that the secondary market for this coin will not be of any consequence, and that most likely the 3 million will wait it out until they can purchase the coins from the individuals mentioned above for less then what they would have paid the… Read more »

little guy says:Do you think dealers that bought the limit allowed (100) are holding and will late sell these at less than what they paid? Don’t see it.If anything, they’ll wait and charge more later.I must be misunderstanding your point.Who really cares who buys them as long as there is a low mintage number.Other than people who are up on this sort of thing,(collecting),most people hear about it after the fact,and when someone likes and wants something,they usually find the means to get it.

I received my order of Disabled Veteran coins. On one of the business strike’s reverse looks like a “swirling” pattern on the field of the coin. Does anyone have any idea what sort of error this might be and if it’s worth forking out the money to have it graded? You can see it on EBay under completed auctions by searching “Disabled Veteran Error” and it should come up. Thanks for any help!!! Get those Boy Scouts before they’re sold out!!!
Jack

I ordered 5 of each, received them in just a few days and they are incredibly beautiful. I also have an MS-70 and a PF-70 D-CAM NGC certified on the way. Looking as hard as I can with a 25X loop, I can see no flaws in any of the 10 coins. However, I always hedge my bet by buying one of each perfect coin.