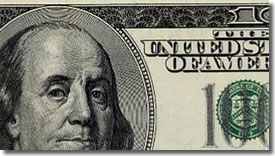 WASHINGTON, D.C. — The new design for the $100 note will make its debut on April 21, 2010, during a ceremony at the Department of the Treasury’s Cash Room. The U.S. government redesigns currency in order to stay ahead of counterfeiters and protect the public.

Decisions about the redesign of each denomination are guided by the government’s close evaluation of the range of ongoing counterfeit threats, whether from digital technology or traditional printing presses.

The unveiling of the $100 note is the first step in a global multi-government agency public education program implemented by the Department of the Treasury, the Federal Reserve Board and the U.S. Secret Service, to educate those who use the $100 note about its changes before it begins circulating.

The $100 note is the highest value denomination of U.S. currency in general circulation, and it circulates broadly around the world.

Public education is an important component of the government’s redesigned currency program because a well informed public is our first and best line of defense against counterfeiting. Free training materials for cash-handlers as well as other public education resources will be available in 25 languages at www.newmoney.gov beginning at 10:30 a.m. EDT on April 21.

I don’t think we’ll ever see another $500 bill, or even a potentially useful new denomination like a $200 bill. High-value bills make it too easy to move large amounts of cash under the radar. That’s why the government stopped distributing $500+ denominations back in 1969.

Yeah, I know that $100 today is the equivalent of about $15 back then, but worldwide use of electronic funds transfer means there’s a far lower demand for large bills. After all, how often to you even see a fifty in change?