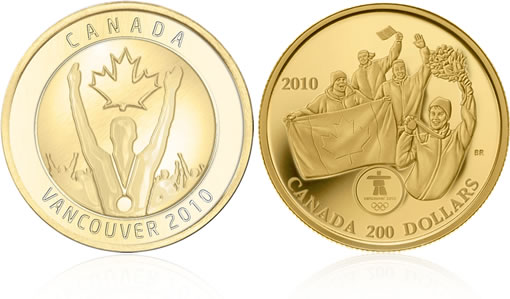 "The Olympic Games movement encourages all athletes to do their absolute best during competition and to view this effort as its own victory," said Ian E. Bennett, President and CEO of the Royal Canadian Mint.

"The Mint congratulates Alexandre Bilodeau for his unprecedented victory and all members of the Canadian Olympic Team for their lifelong dedication to sport and for bringing the country together to watch each thrilling moment of the Vancouver 2010 Olympic Games."

"Across the country, Canadians are celebrating the heroic efforts of our athletes," said Minister of State Rob Merrifield. "Alexandre Bilodeau’s performance will be forever burned into our national memory as the first Olympic gold medal won on our home soil."

The First Canadian Gold Medallion & Nugget captures the pride of Canada in marking this extraordinary event. The gold-plated commemorative medallion, which depicts an athlete with arms raised in victory, includes a special souvenir medallion plus nuggets from Teck Resources containing metals from the actual making of the Vancouver 2010 medals. This once-in-a-lifetime keepsake retails for $24.95.

The Mint has also produced a 22-karat gold $200 Olympic Gold Coin. Designed by Halifax artist Bonnie Ross, this coin features a design of four athletes in various celebratory poses. Limited to a mintage of 2,010, this coin retails for $989.95. The Mint will proudly present this commemorative coin to Alexandre Bilodeau at the Royal Canadian Mint Pavilion in the coming days.

These products are available for purchase at www.mint.ca/2010, by calling 1-800-267-7000 or by visiting the Mint’s boutiques in Ottawa and Winnipeg and the Royal Canadian Mint Pavilion in Vancouver during the Games. Since January 2007, the Mint has produced 79 collector coins and 53 gift products celebrating the Vancouver 2010 Olympic and Paralympic Winter Games.

Canadians are encouraged to visit www.mint.ca/2010 to obtain a unique souvenir to mark this monumental event in our nation’s history.

From February 12-28, the Mint is welcoming the world to the Royal Canadian Mint Pavilion, located in downtown Vancouver. This must-see exhibit allows visitors to get an up-close view of the medals for the Vancouver 2010 Olympic and Paralympic Winter Games; view the Mint’s world-famous million-dollar gold coin and other gold products; learn how coins are made; participate in children’s programming; collect all Vancouver 2010 circulation coins and purchase unique Vancouver 2010 souvenirs.

he Mint is an Official Supporter of the Vancouver 2010 Olympic and Paralympic Winter Games and has undertaken to produce the most extensive circulation coin program in relation to the Olympic Games ever conceived by any mint worldwide, while also offering limited mintage collector coins and sets. Visit www.mint.ca/2010 for Vancouver 2010 keepsakes and gifts.