A sixteen-year-old schoolboy from Rishworth School, Halifax has entered the history books today after becoming the first teenager to design a British coin. 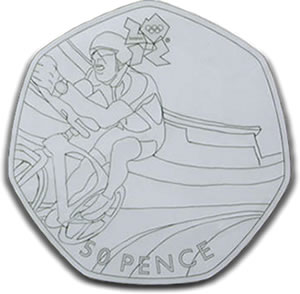 Theo Crutchley-Mack entered a nationwide secondary school competition, organised by the Royal Mint, in April 2009, to create a London Olympic Games cycling themed 50p. His design, featuring a rider racing a bike in a Velodrome, beat off huge competition from over 3,000 entries from pupils across the country.

To mark his achievement Dave Knight, The Royal Mint’s Director of Commemorative Coin, officially announced Theo’s win at a surprise assembly at Rishworth School today, and presented him with a one off gold ‘striking’ of his design.

Commenting on his win, Theo said: "I’m still in shock. I think I need a bit more time for it to sink in. To imagine my coin design is going to be in everyone’s hands is unbelievable. I’ve just finished my GCSE mock exams and I wish I’d have known about this earlier – I could have used my coin design as part of my GSCE art coursework! I’m really looking forward to going to the Royal Mint next week to see my coin being produced."

Dave Knight said: "Theo is passionate about cycling and it showed in his design. The judges were impressed by the sense of speed, drama and excitement he managed to capture in his entry." 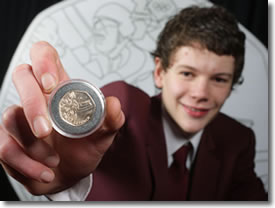 His creation is the second in a series of 29 officially licensed London 2012 50p commemorative coins, designed by members of the public as lasting mementos of the London 2012 Olympic Games and Paralympic Games. Each coin in the series depicts a different Olympic and Paralympic sport, with the remaining 27 coins to be revealed Autumn 2010.

Theo’s parents and grandmother were on hand to watch a giant, two metre replica of his design be unveiled on the assembly stage, stunning friends and teachers alike, who knew nothing of his momentous win.

In addition, Rishworth School was awarded a £10,000 prize courtesy of the Royal Mint. Headmaster, Richard Baker, explains how they intend to put the money to good use: "What Theo has achieved is truly exceptional — he’s a fantastic role model and has done all Rishworthians proud.

We feel that the wider community should benefit from this win, as well as our pupils. We’re talking to Theo about how to do this, including helping local, not-for-profit cycling clubs in the area, like Theo’s club, Pedal Sport, based in Halifax."

Pedal Sport’s Mark Rushby, who was also at the special assembly, said: "We’re absolutely thrilled by the news. Theo has been a member of the club for several years and is a skilled and enthusiastic cyclist – he even started assisting the coaches who take the younger classes. Cycling is a great sport and any help Pedal Sport receives to encourage local children into the sport will be fantastic. And who knows, perhaps one day, thanks to Theo, someone from our club will make it to the Olympic Games or Paralympic Games themselves."

Theo’s cycling design will be found on millions of 50p coins in people’s change from September this year, when The Royal Mint’s London 2012 50p series goes into general circulation.