To celebrate a 3,250 kilometer expedition to cross Australia’s frontier back in 1860, both mints from Australia have released commemorative coins.

The Royal Australian Mint issued the 2010 Burke and Wills Expedition 150th Anniversary 20c and $1 Australian Coins. In further celebration, The Perth Mint of Australia is commemorating the historic journey with its own 2010 Burke & Wills Anniversary Silver Proof Coin. These coins serve as a reminder of the daring and tragic story behind the expedition.

By the mid-1800’s, Australia had become a magnet to well-educated individuals seeking to become wealthy in the booming gold industry of the Melbourne area. One of the by-products of this influx of professionals was the creation of the Royal Society of Victoria, a group dedicated to scientific advancement. Almost immediately, the Royal Society took up the cause of an inland exploration of Australia.

Politics appears to have played a significant role in determining the make-up of the exploration party and unfortunately, the best individuals were not chosen for it. Robert O’Hara Burke, a former officer in the army and current police superintendent was picked to lead the expedition, despite having virtually no frontier experience. William John Wills was selected as surveyor, navigator and third-in-command, and at least had some experience in the wilderness.

With the group packed, the expedition left Melbourne with 19 men, 23 horses, 6 full wagons of supplies (enough to last two years) and 26 camels. A sign of the troubles ahead, one wagon broke down even before they were able to get out of the Royal Park. By midnight that night, the expedition had made it only to the edge of the city, where two more wagons broke down. Taking two months to travel a distance of 750 kilometers (a distance the mail coach did in a little more than a week), the group had lost two of its five officers through resignations and had fired thirteen men, replacing them with eight new ones along the way.

Almost four full months into the expedition, the men finally reached the edge of what had been previously explored by Europeans. Splitting his group in order to reach the coast faster, Burke and Wills pushed forward. Crossing the outback in summer where temperatures routinely reached 120° Fahrenheit (50° C), the smaller party reached within 5 kilometers of the coastline before swamps forced them to head back to Melbourne. The six month journey had taken its toll on men and supplies. Burke and Wills returned to the location where they had left the rest of the expedition 18 weeks earlier, only to find that they had already left for home themselves. With little food and strength remaining, Burke decided to lead his party through the desert to reach settlements rather than re-tracing his previous route.

Unable to carry enough water, the group once again returned to their camp at Cooper’s Creek. Aided by local Aborigines, the three remaining men started to recuperate until Burke fired his pistol at a native, resulting in them never returning. Within a month, both Burke and Wills would die as a result of poor nutrition. The third man, named King, would survive another month with the help of the locals before being rescued by another party sent to their aid. Altogether, the expedition cost seven men their lives but would become legendary in the hearts and minds of the Australian people.

The two Royal Australian Mint coins struck to honor this daring journey include a $1 cupro-nickel coin that depicts the hardships the expedition encountered and shows the survivor King resting under the "Dig Tree" where supplies had originally been left for Burke and Wills.

The 20c aluminum-bronze coin shows a valiant Burke and Wills atop their camels leaving on the fateful trip. Both were designed by sculptor Wojciech Pietranik with the packaging designed by Sabina Foster.

"It is fitting to launch these coins in Melbourne as the Burke and Wills expedition departed almost 150 years ago from a site not too far from where we stand today," said Assistant Treasurer Senator Sherry when revealing the new designs.

"The Burke and Wills expedition ended in tragedy but not in vain. They were able to provide a complete picture of inland Australia and prove there was no inland sea. That is no minor feat and I am proud to honour the expedition, their achievements and their stories on these two coins."

The coins are available in a two-coin proof set for AUS $45 or an uncirculated set for AUS $15 directly from the Royal Australian Mint. 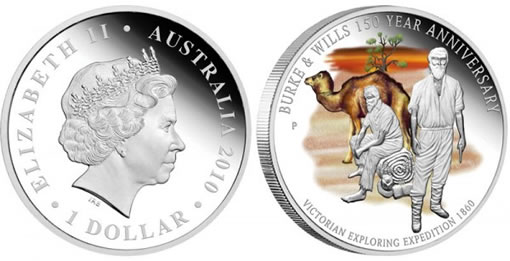 As legal tender of Australia, Ian-Rank Broadley’s portrait of Queen Elizabeth II is found on the obverse with Burke and Wills immortalized on the reverse. The pair, shown understandably exhausted, are highlighted in front of a colorized camel and landscape.

The silver coin is limited to a maximum mintage of 7,500. Each comes in a black presentation case with a sheoak timber lid which ships in an illustrated shipper along with a numbered Certificate of Authenticity. The Burke and Wills coin can be purchased directly from the Perth Mint and from around the world for AUS $81.36

For separate articles on these coins, also see: