The 2010 Presidential Dollar series represents the fourth year for the program which launched in 2007. Although the United States Mint website has yet to publish specific launch dates for the 2010 $1 coins, the Federal Reserve Bank has as part of its 2010 distribution schedule.

In the order of their official release, the:

Under the US Mint Presidential $1 Coin Program, four new coins are created annually to honor the former Presidents of the United States in the order in which they served.

The Presidential Coin Act of 2005 (the law authorizing the coins) dictates that the program shall run until all eligible individuals have been honored. The act does require, however, that no coin shall be struck for any living person and that if a former President should pass away during the program, a coin may not be issued until at least two years after his death. Accordingly, this program is scheduled to run at least until 2016.

The obverse of each coin carries a portrait of the honored President along with inscriptions of their name, their dates of service, their order of service and “In God We Trust.”

Each coin also has edge-incused lettering (inscriptions on the edge of the coin), something which has not been seen on circulating American coinage since the St. Gaudens’ Double Eagle. Aside from the year of minting and the mintmark, “E Pluribus Unum” is found on the edge.

Don Everhart’s image of the Statue of Liberty is found on all of the reverses for the series along with the inscription “United States of America.”

The coins are struck from copper with a manganese brass cladding to give it a golden hue.

More information on the specific 2010 Presidential Dollar releases and the men they honor is provided below.

Millard Fillmore Presidential Dollars – with a scheduled release of Feb. 18, 2010, the coin honoring President Fillmore features a portrait of him designed by Don Everhart. 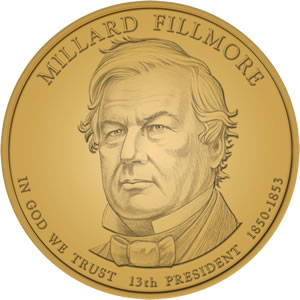 Fillmore served as the 13th President of the United States from 1850-1853 after assuming the office when President Zachary Taylor passed away. These were tremulous times for the country which was already on the verge of a civil war, postponed by the Compromise of 1850. Fillmore is credited with the 1854 Treaty of Kanagawa effectively ending the isolationism of Japan.

2010 Franklin Pierce Presidential Dollars – Susan Gamble designed the portrait of President Pierce seen on the obverse of his coin. It was sculpted by Charles L. Vickers and should appear in circulation beginning on May 20, 2010. 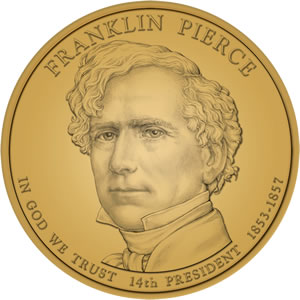 Pierce served as the 14th President from 1853-1857. Most feel he was nominated as the Democratic candidate because he was a supporter of the Compromise of 1850, and even though he was from the North, he had southern sympathies.

Pierces likeable personality did not protect him from widespread criticism over his Presidential decisions which most felt were too divisive. Consequently, he was unable to obtain his party’s re-nomination and only served one term.

2010 James Buchanan Presidential Dollars – Due out on Aug. 19, 2010, the Buchanan Dollars feature an image of him designed and sculpted by Phebe Hemphill. 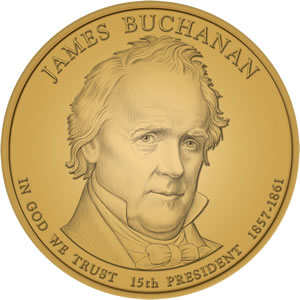 Buchanan began a successfully law career in his early twenties and would turn to politics shortly thereafter. Known as a gifted orator, he would also serve in several diplomatic posts which would later prove instrumental in his election as President.

While serving as the U.S. Minister to Great Britain, Buchanan received his party’s nomination as President owing mostly to his being out of the country during the previous years. Removed from the volatile North-South situations of the day, his positions on the matter were not well known making him an ideal candidate.

However, upon election, it was obvious the country was in for darker times ahead and Buchanan only served his one term declining to seek re-election.

2010 Abraham Lincoln Presidential Dollars – Expected to be released on Nov. 18, 2010, the Lincoln Dollars are anticipated to be among the most highly sought after in the entire series. 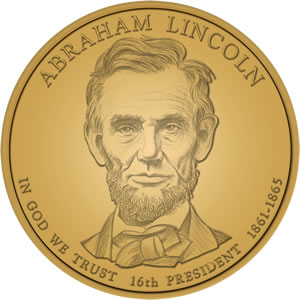 The portrait of Lincoln seen on his coin was designed and sculpted by Don Everhart.

While running for the office of President, Lincoln knew terrible times were in store. This was made painfully obvious when several states ceded from the Union shortly after his election.

Intent on preserving the Union, Lincoln led the country in its efforts against the South during the American Civil War. Following the North’s victory, one would assume joyous times for Lincoln, but he was assassinated within days of its end by a Southern sympathizer.

Aside from the circulation coins issued of the Presidents, they may also be found in several other products from the US Mint including various proof and uncirculated mint Sets. These may be purchased directly from the Mint following their release.

You do a great service and are appreciated. Keep up the good work. I look forward to reading them.

Please send infor when the release dates are for 2011 gold dollars.

please inform me of 2011 presidential dollar release dates when available.