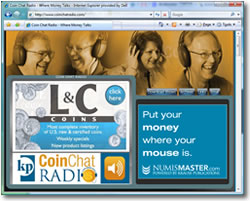 Gold coins are discussed by Bob Van Ryzin during his segment of "What’s In The News" on this week’s episode of Coin Chat Radio.

Top news story is the December 4th US Mint memo to its authorized purchaser network informing them that the 2009 American Buffalo Gold Bullion coins would no longer be available for the year. 200,000 had been sold since their introduction in October.

Numismatic News editor Dave Harper looks ahead to the new year when he talks with Cindy Wibker, Florida United Numismatists (FUN) show coordinator. The show is scheduled for January 7-10, 2010 in Orlando, Florida. All indications are that it will be bigger and better than ever.

"Right now everything is as smooth as can be," responds Wibker when asked by Harper how plans were going for the Fun Show. "Bourse table sales are very, very strong and we’re looking forward to another great convention!"

"We’ve gone up continuously for the last 16 years," Wibker replied when Harper questions the progress of bourse table sales compared to previous years. "Last year was our biggest ever at 563, I believe. And today, as I am sitting here at my computer we’re just over 550, and we still have a couple of weeks to go. So hopefully we’ll set a new record this year!"

The Bureau of Engraving and Printing is scheduled to be a part of the Show with their billion dollar display according to Wibker. Also slated as part of the events is the ability to pan for gold thanks to the Gold History Corporation from North Carolina and multiple educational activities.

One of many highlight of the show looks to be Heritage Auction Galleries’ 1913 Liberty Head Nickel. Wibker goes as far as calling that coin the "Queen of the Ball’ for the show and will be one of many coins that will be auctioned during the 4-day auction.

Online Editor Lisa Bellavin and Publisher Scott Tappa then take a few moments to discuss the new Chicago International Coin Fair (CICF) partnership with Heritage Auctions. Heritage is already taking consignments for the Coin Fair which is scheduled for April 22-25, 2010.

Closing out Coin Chat this week is World Coin News Editor Maggie Stigsell with a new coin from the Royal Mint in the "Freshly Minted" segment. The 2009 Big Ben Five Pound Crown is part of the London 2012 Olympics coin series. Of interest, one of the Big Ben coins was placed inside the movement of the famous clock with the same name. It replaced other coins in the clock that were placed there 150 years ago to act as weights.

To hear this week’s episode of Coin Chat Radio, visit their website at www.CoinChatRadio.com. Previous episodes are also available there.