The Royal Canadian Mint is inviting Canadians to save the latest circulation coin in its Vancouver 2010 collection — the 25-cent coin celebrating the women’s hockey gold at Salt Lake City in 2002. 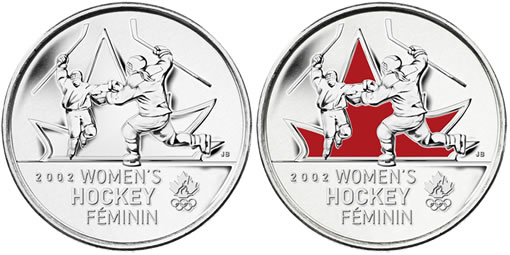 The launch of the coin was commemorated today at a special event for local hockey youth with special guests including member of the 2002 women’s Olympic hockey team, Danielle Goyette and members of the Montreal Juniors Hockey Club.

"Canada’s women’s hockey team demonstrated the true meaning of spirit and determination when they won the gold medal on February 21, 2002, which triggered celebrations from coast to coast to coast," said Ian E. Bennett, President and CEO of the Royal Canadian Mint. "Employees of the Mint are extremely proud to have produced a coin commemorating this extraordinary moment in Canadian Winter Olympic Games history."

Up to 22 million 25-cent coins celebrating the women’s hockey gold medal at Salt Lake City in 2002 will enter into circulation today, November 17th. In a unique twist, three million of these coins were produced in brilliant colour and inserted randomly into circulation coin rolls.

The women’s hockey gold medal at Salt Lake City was voted by fans as the #2 Canadian Winter Olympic Games Moment of all time — out of 10 moments — in an online contest hosted earlier this year by the Mint and Canada’s Olympic Broadcast Media Consortium. The top three moments will be featured on 25-cent coins. Coming in at #1 was the men’s hockey gold medal at Salt Lake City 2002 (coin launched on September 29th) and Cindy Klassen was voted as moment #3 and her five long track speed skating medals at Turin 2006. This coin will be launched into circulation on January 5, 2010.

Designed by Burlington, Ontario artist Jason Bouwman, the 25-cent coin celebrating the women’s hockey gold medal at Salt Lake City in 2002 features two hockey players celebrating their victory, on the backdrop of a maple leaf. The words ‘women’s hockey féminin’, the year ‘2002’ and the logo of the Canadian Olympic Committee also appear on the reverse of the coin. The three million coloured 25-cent coins, which were produced using state-of-the-art patented technology at the Mint’s Winnipeg facility, feature the maple leaf in brilliant red colour.

The Mint has also produced a special uncirculated set featuring all three coloured moments coins, available at www.mint.ca/2010. This set and other Royal Canadian Mint products are also available for purchase by calling 1-800-267-7000. Visitors to www.mint.ca/2010 can request a free coin collector card, to keep all of the circulation coins from the Vancouver 2010 collection.

In addition to the third moment coin, Canadians can look forward to the release of the remaining 2010 Olympic and Paralympic Winter Games themed circulation coins: the 2010 Lucky Loonie coin will be launched on the first day of the Vancouver 2010 Winter Olympic Games (February 12, 2010), while the 25-cent coin featuring the sport of sledge hockey will be launched during the Vancouver 2010 Paralympic Games (March 18, 2010).