For the first time in Big Ben’s 150 year history, a new £5 Crown, from the Royal Mint is being used to help London’s iconic clock keep time.  The 2009 Big Ben £5 Crown was today placed inside the movement of the Great Clock and will play an essential role in maintaining its famous accuracy. 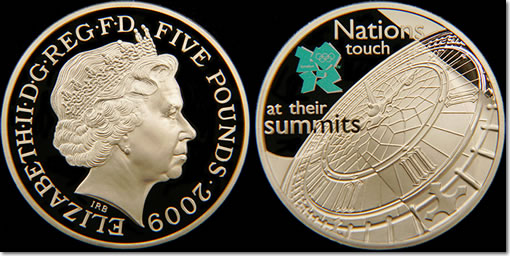 The coin change-over forms part of Big Ben’s 150th Anniversary celebrations, with the new £5 Crown, one of the official London 2012 licensed coins, replacing some of the pre-decimal pennies which have acted as weights inside the clock since 1859. This is the first time any of the coins inside the clock have been changed.

As part of the Royal Mint’s collection celebrating London 2012, a further 100,000 of the commemorative coin have been specially minted by the Royal Mint to help the public celebrate Big Ben’s momentous anniversary and are available now to purchase from www.royalmint.com.

Mike McCann, Keeper of the Great Clock commented: "There is a long and historic relationship between Big Ben and the UK’s coins. Few people realise the technical role the old pennies have played inside the clock.

For 150 years, coins have been used to adjust the time of the clock – adding or subtracting them effects the pendulum’s centre of mass and the rate at which it swings. Using the new Royal Mint Big Ben Crown is a great way to celebrate this relationship.

The fact that Big Ben is still so iconic for Londoners and indeed, the nation, is testament to its engineering genius.  I am thrilled that The Royal Mint has decided to celebrate our country’s achievements with the launch of a special coin."

2009 marks 150 years since the completion of the Clock Tower, the starting of the Great Clock and the first time the Great Bell’s strikes were heard.

Dave Knight, Director of Commemorative Coin at The Royal Mint commented: "We thought this was the perfect way to help celebrate 150 years of Big Ben — one of the country’s most iconic landmarks — and the historic usage of coins inside the clock.

We are honoured to be allowed to place one of the new Royal Mint £5 Crowns inside the clock itself.  In the run up to London 2012, it is apt that a coin celebrating this momentous event becomes part of London’s history"

The 2009 Royal Mint Big Ben £5 Crown is an official Licensed Product of London 2012, highlighting the achievements, physical character and identity of Great Britain in the lead up to the great event. The clock face of the Palace of Westminster on this coin symbolises democracy and the key role Britain has played through its Parliament in bringing democracy to the world.  The ‘Nations touch at their summits’ quotation, is a way of referring to the Olympic Games and Paralympic Games as the pinnacle of sporting achievement.

CoinNews.net - October 4, 2022 6
A magnificent hand-signed, triple signature 1882 $100 gold certificate, one of just two known examples, will become a centerpiece of a new collection when...