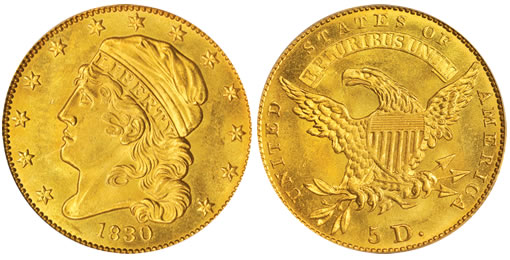 The spotlight of the auction is this High Condition Census 1830 BD-1 Half Eagle, a Gem example of a rare and seldom-offered issue

"Bowers and Merena has presented many successful auctions in 2009, including two earlier Official Baltimore auctions and two Official ANA auctions, and I am very pleased to finish 2009 with our largest auction of the year by number of lots crossing the block," said Steve Deeds, president of Bowers and Merena auctions.

"With more than 6,000 lots in the auction, including the incredible Globus Collection and many highlights, this is an auction that will offer something for everyone, be it U.S. or World, coins or currency."

The two die marriages are fairly similar in rarity, although a slight edge goes to BD-1 with only 25-35 coins known to exist. As a fully lustrous and minimally abraded Gem, this gorgeous BD-1 example is high in the Condition Census for both the issue and the die pair, with a PCGS Populations of just one and a mere two finer, both of which grade MS-66.

Dr. Alfred R. Globus was one of America’s most renowned numismatic collectors. In addition to the 1830 Capped Bust Half Eagle, Bowers and Merena will present several hundred U.S. and World lots from his collection, including these impressive highlights:

Additional highlights in the Official Baltimore Auction in November include lot 3871, an extremely rare Mint State 1879-O Double Eagle, Condition Census for this low-mintage, key-date issue. This 1879-O Winter Variety One, the only known dies graded MS-60 by NGC, has a combined PCGS and NGC Population of just eight with a mere two finer at the latter service (MS-63 finest).

Also noteworthy is lot 3869, highly elusive 1878 Double Eagle in Proof-64 Cameo by NGC. A very rare issue by any standard, the 1878 has one of the lowest mintages in the entire proof Type III Double Eagle series. Only 20 coins were produced, and survivors probably number fewer than 10 specimens in all grades. At least one of the survivors is impounded in a museum collection, and two or three of the others are impaired. The Proof-64 Cameo in this lot, therefore, is in extremely limited company as a high-quality proof 1878 Twenty in private hands.

All lots and images in the Bowers and Merena Official Auction of the Whitman Coin & Collectibles Baltimore Expo can be viewed online at www.bowersandmerena.com, and printed catalogs are available upon request by calling 800.458.4646.

Interested bidders are also encouraged to view lots in Baltimore November 10-14, 2009, and bid in-person at the live auction, or live online through the Bowers and Merena website. A complete auction and lot viewing schedule is available at www.bowersandmerena.com or by calling 800.458.4646.

For more information about Bowers and Merena’s Official Auction of the Whitman Coin & Collectibles Baltimore Expo in November, call 800.458.4646.  For media inquiries, ask for President Steve Deeds. Complete prices realized for all past auctions are available at www.bowersandmerena.com.