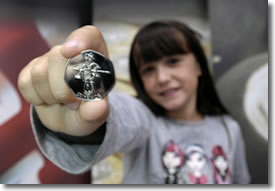 Nine-year-old Florence Jackson, from Bristol, was today revealed as the first child ever to work with the Royal Mint to design a UK coin.

Florence won the once-in-a-lifetime opportunity to design a coin celebrating London 2012 by taking part in a CBBC Blue Peter competition. The competition proved one of the show’s all time most popular, with Florence’s design beating over 17,000 other entries.

Florence Jackson, said: "I was so excited. It was a real surprise to win. I’d never entered a Blue Peter competition before, but really wanted to take part because I love drawing.

I chose the high-jump because I’d watched it on TV before and thought it looked fun. It was amazing to visit the Royal Mint and see my picture turned into a coin. I can’t wait to see it in my pocket money!"

Florence was joined by Olympic gold medallist Denise Lewis and Blue Peter presenter Andy Akinwolere at the Royal Mint to strike her first coin and will be officially announced as the competition winner on tonight’s Blue Peter (Tuesday 13 October) at 4.35pm on BBC One.

Her winning design will feature on the reverse of the 2010 50 pence coin and depicts the high-jump, celebrating the Olympic and Paralympic sport of Athletics. 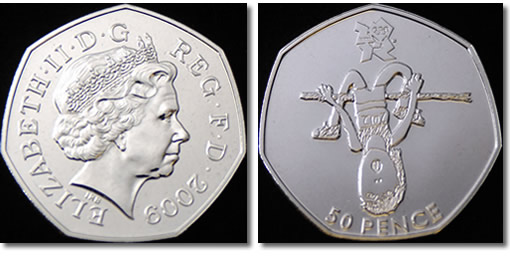 A limited edition Brilliant Uncirculated version of the coin is available to buy now from www.royalmint.com and the design will be found on millions of circulating 50 pence coins next year.

Denise Lewis said: "Florence has done all Olympians and Paralympians proud. Her design is simple and effective and I’m honoured to say I saw it first. Florence is a very deserving winner and her coin is a great illustration of how everyone can be a part of London 2012."

Florence’s winning design is the first in a series of 29 officially licensed London 2012 50p designs by the nation that will act as lasting mementos of the 2012 Olympic and Paralympic Games, the UK’s most significant sporting events for this generation. The remaining 28 designs will be revealed from 2010, the result of the Royal Mint’s biggest ever competition for the public to design the UK’s coinage. Each coin will depict a different Olympic or Paralympic sport.

2009 marks 40 years since the introduction of the 50 pence piece — the UK’s most distinctive circulation coin. Florence’s design for the Blue Peter 50p Winners Edition coin is only the 17th design to appear on the UK’s 50 pence and the first UK coin to be designed by a child in over 1,100 years of Royal Mint history.

As an Official Licensed Product of London 2012, the Blue Peter 50p Winners Edition coin features the official London 2012 logo. It is available to buy now in limited edition Blue Peter packaging at £1.99 from www.royalmint.com.