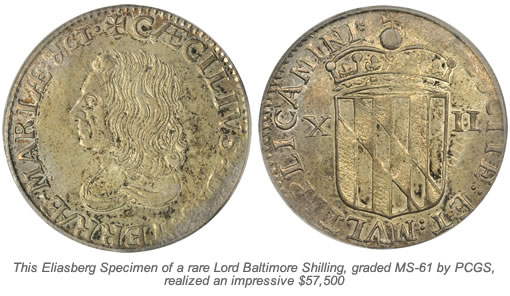 "The city is so rich in American history which lends itself to the real nature of what we do in numismatics, and we were very fortunate to be able to present an extensive selection of rare Colonial and Early Federal Era coinage that was very much in keeping with this historic theme. The turnout was great and we are very pleased with our results."

A highpoint of the day came early with lot 15, an undated (circa 1659) Lord Baltimore Shilling graded MS-61 by PCGS, the Eliasberg Specimen, which realized an impressive $57,500. A definite highlight of the extensive Colonial-era coinage that Bowers and Merena offered in the sale, this Lord Baltimore Shilling is the highest graded by PCGS and may very well be the finest-known example of the type.

Prices realized for all lots in the Bowers and Merena Official Pre-show Auction of the Whitman Coin & Collectibles Philadelphia Expo are available online at www.bowersandmerena.com.

Bowers and Merena’s next auction will be the Official Auction of the Whitman Coin & Collectibles Baltimore Expo held November 10-14, 2009, at the Baltimore Convention Center. Complete lot viewing and auction schedules will be posted at www.bowersandmerena.com, and U.S. and World catalogs will be available in print and online by late October.

For more information about Bowers and Merena’s Official Pre-show Auction of the Whitman Coin & Collectibles Philadelphia Expo in September, call 800.458.4646. For media inquiries, ask for President Steve Deeds. Complete prices realized for all past auctions are available at www.bowersandmerena.com.