George Fuld, Alan Meghrig, and George Frederick Kolbe are pleased to announce publication of a new book listing in detail all known specimens of the Silver Getz half-dollar, the Getz 1792 copper "cents," and the related 1797 Getz Masonic medals. 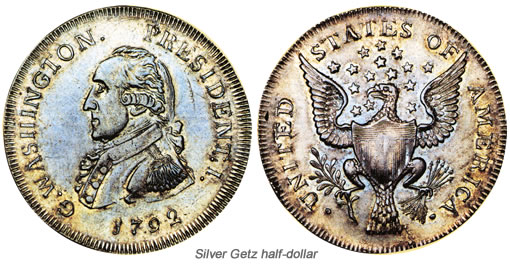 Based on the early researches of Jack Collins, the work was brought to fruition by George Fuld, with assistance from Alan Meghrig and George Kolbe. It is a meticulous census of all specimens known, accompanied by pedigrees, auction records, weight, diameter, condition, detailed descriptions, and other pertinent data. Copies will be produced on a high quality laser printer and will feature full-color enlargements of virtually all of the pieces described.

Although estimates of the number known of the Getz issues have varied widely, the author has been able to trace probably twice as many pieces as had been previously estimated. Twenty-two different Silver Getz 1792 half-dollars are listed, as are fifty-five different Copper 1792 "cents" and twenty different Baker 288 1797 Getz Masonic medals.

The consensus of early estimates of the number of Getz copper issues struck was about one hundred. This is obviously quite low as a retention of over fifty percent of a two hundred year old issue is quite improbable. Certainly, not all Getz survivors have been located and information from collectors who might have an unlisted specimen is welcomed.

Two chapters in the book cover new aspects of Getz material. There is a thorough discussion of the unique Getz silver large eagle (Baker 23). It is condemned as a non-contemporary production from about 1850. Also, the story of the Washington Ladle is presented for the first time to the numismatic world. The fascinating details surrounding the 1797 presentation of this buffalo horn ladle by George Washington to Francis Preston are given in detail. The ladle had in its bowl a silver specimen of the Getz Masonic medal dated 1797.

The book is available in two different versions. Soft-bound and hard-bound copies are available at a special price for copies ordered by December 31, 2009, as follows.

Copies of the books may be ordered from (View PDF of Order Form):

After December 31, 2010, orders for the book will no longer be accepted.