The Perth Mint today launched the 2010 Australian Kangaroo Gold Coin Series, continuing its tradition of producing gold bullion coins with an image of Australia’s famous marsupial. This basic kangaroo concept started in 1990, with design variations changing yearly on most of the coins.

Considered legal tender under the Australian Currency Act of 1965, these coins are all 99.99% pure gold, guaranteed by the Australian government for weight and purity.

The kilo coin has a classic hopping kangaroo design on its reverse created by Dr. Stuart Devlin, AO CMG goldsmith and jeweller to Queen Elizabeth II of England. All of the coins feature an image of the queen on their obverse designed by Ian-Rank Broadley with the inscriptions ‘Elizabeth II,’ ‘Australia’ and the face value surrounding the portrait. 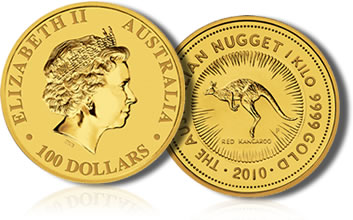 With the limited production of these coins, buyers may realize a potential premium over the intrinsic value of the coins, based on their numismatic collectibility.

Also, for protective purposes, all the kangaroo coins will ship in acrylic capsules.

The gold coins are available through The Perth Mint’s distribution network and dealers.

What is the value of the AUSTRALIAN KANGAROO GOLD COINS?