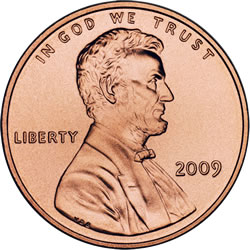 On Monday, August 2, 1909, people lined up at banks and other distribution points in America’s major cities. It was an event like the country has never seen before. For the first time in the United State’s history, a coin minted for circulation was to carry the portrait of a real person. Sure, the US Mint produced a coin with other portraits, but they were commemoratives and not intended for circulation, even though some did circulate.

But this was different. This was the portrait of one of our greatest presidents. Abraham Lincoln, our 16th president, was being honored on the cent the year the country celebrated the 100th anniversary of his birth.

The new Lincoln Head Cent featured a portrait by Lithuanian immigrant, Victor David Brenner. Brenner, who came to the United States in 1890, learned engraving in New York City and spent the rest of his life honoring his adopted home with beautiful portraits of Lincoln, Theodore Roosevelt, and other leaders.

Even with the excitement the release was not without controversy. Almost instantly, the public did not like the prominence of the artist’s initials "V.D.B." on the reverse of the coin. On August 5, 1909, Treasury Secretary Franklin MacVeagh ordered production halted in order to remove the initials from the coin’s reverse.

When production was halted, over 27 million were struck in Philadelphia but only 484,000 were struck in San Francisco. With the rumors that the US Mint would recall the VDB cents, speculators saved as many coins as possible. But with only 484,000 minted, the 1909-S VDB became an instant key date in the new Lincoln Cent series.

Chief Engraver Charles Barber removed the initials from the master die but did not add them anywhere else claiming it would too difficult and would take too much time. When George Morgan was named Chief Engraver following Barber’s death immediately and effortlessly added Brenner’s initials to the trunk of the bust.

Brenner’s design lasted 50 years even with a one-year composition change in 1943. In order to preserve copper for the war effort, over 1 billion coins were struck in 1943 on zinc-coated steel planchets–which were not popular when they were circulated.

For the 150th anniversary of Lincoln’s birthday, the US Mint’s Tenth Chief Engraver Frank Gasparro redesigned the reverse of the coin to show the Lincoln Memorial. The obverse would continue to use the Brenner portrait of Lincoln.

As we celebrate the Bicentennial of Lincoln’s birth, the reverse of the coins were redesigned for the celebration. But as it has been since it was introduced in 1909, the cents feature the portrait of Lincoln designed by Victor David Brenner.

Since August 2, 1909, the US Mint says that they have struck over 450 billion Lincoln Cents. This probably makes the Brenner portrait of Lincoln the most duplicated of any portrait in history. Talk about history in your hands!