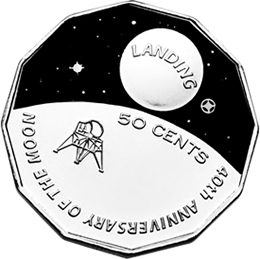 Forty years ago today mankind made history with the famous first step on the Moon. In 1969 the Royal Australian Mint made its own history with the issue of the new dodecagonal 50 cent coin.

At a commemorative Apollo 11 anniversary event in Canberra today the Mint officially launches its brand new 50 cent collector coin to celebrate the historic moon landing in 1969.

"Taking the first step on a celestial body is arguably one of the human race’s greatest achievements of all time," said Graham Smith, Acting Chief Executive Officer of the Royal Australian Mint.

"Some of the first pictures from the Moon’s surface were sent around the world from Honeysuckle Creek near Canberra and the Royal Australian Mint is proud to officially launch its newest coin to celebrate this occasion," said Mr Smith.

"Watched by six hundred million people, it is still a classic memory for many and I am pleased to release a coin which gives each Australian the opportunity to hold a piece of history in their own hands."

"It seemed fitting for the Royal Australian Mint to celebrate the 40th anniversary of man landing on the Moon with a 50 cent piece as 2009 marks 40 years of its circulation."

"The coin was also buried in a time capsule yesterday at Honeysuckle Creek along with other memorabilia, which will be dug up to mark the 100 year anniversary of Apollo 11 in 2069."

The first 50 cent piece was a round silver coin but was changed in 1969 to a cupro-nickel 12 sided coin because of the high silver prices and to make it easier to distinguish from the 20 cent coin.

"The large diameter of the 50 cent coin has been a grand canvas to create numerous commemorative designs over the past years and has launched many of our customers on the road to collecting. Coins from the Royal Australian Mint, and the themes they acknowledge, are always great mementoes of our rich and proud heritage and culture," said Mr Smith.

The 2009 50c 40th Anniversary of Moon Landing coin was designed by Caitlin Goodall and depicts the lunar module in space on its way to Tranquility base on the Moon. It will not be released into circulation and will remain an exclusive numismatic collectible.

I wish the US Mint weren’t so reluctant to create and release commemorative coins like this one. Other mints from around the globe release coins honoring everything from animals to sports. Heck, now foreign mints are releasing coins dedicated to American ingenuity! Perhaps its time for the US Mint to catch up with some of its foreign competition and release coinage dedicated to American feats and unique sights. A series of official coins dedicated to the history of baseball, for example. If the Mint is worried about its bottom line, I’m sure there are ample coin collectors eager to buy… Read more »