John Tyler $1 Coin Covers will be available on July 2 at 12:00 noon (ET), the US Mint announced Thursday.

These limited edition covers include two Tyler Presidential $1 coins that were minted on the first day of production. One dollar is from the Mint’s Denver facility and was struck on Feb. 17. The other is from Philadelphia and was minted on Feb. 23.

The presidential covers have a price tag of $14.95, plus $4.95 for standard shipping and handling. No household order limits are in place, but the covers do have a maximum production set at 40,000.

In addition to the two $1 coins, the display card carries a 44-cent Flag postage stamp with a postmark of May 21, 2009, Charles City, VA, which is when the Tyler $1 coins were released to the public. 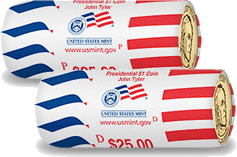 The John Tyler dollar is the tenth coin released in the series honoring U.S. Presidents. It is the second for 2009 after the Harrison $1 coin launch. The following two Presidential $1 coins will be released later this year:

When available, orders may be placed on the U.S. Mint’s product and order page: