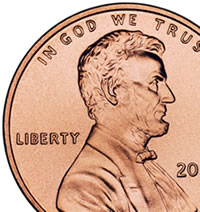 For the last few months, the Commission of Fine Arts and the Citizens Coinage Advisory Committee have been volleying between each other and the sculptor-engravers at the US Mint over the design of the reverse for the 2010 Lincoln Cent. Based on what is being reported one thing is clear, the designs are somewhat less than stellar.

According to Public Law 145-109 Section 303 states, "[the] design on the reverse of the 1-cent coins issued after December 31, 2009, shall bear an image emblematic of President Lincoln’s preservation of the United States of America as a single and united country."

While the mandate sounds simple, there is a catch: Lincoln only caught a glimpse of a united country. Prior to Gen. Robert E. Lee’s surrender on April 9, 1865, Lincoln visited Richmond after it was taken by Union troops. Lincoln was greeted as a conquering hero by newly freed slaves on his way to visit the Confederate capital.

When Lincoln arrived at Jefferson Davis’s office, he sat behind Davis’s desk to symbolize that there was only one president who had the authority to rule over the land. Lincoln was assassinated on April 14, 1865 and died on April 15. 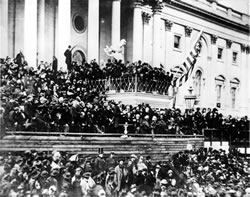 Lincoln was re-elected in 1864 with 55-percent of the vote and a 212-21 electoral vote margin. On March 3, 1865, Lincoln gave his second inaugural address as the war was winding down. Lincoln’s theme turned to healing as he ended his address:

With malice toward none; with charity for all; with firmness in the right, as God gives us to see the right, let us strive on to finish the work we are in; to bind up the nation’s wounds; to care for him who shall have borne the battle, and for his widow, and his orphan—to do all which may achieve and cherish a just and lasting peace, among ourselves, and with all nations.

With that rich and well documented history, someone could not come up with a good theme to represent the preservation of a united country?

Even though the Confederate states did not participate in the 1864 election, Lincoln’s re-election and inaugural speech laid claim to his desire to end this bloody chapter in our history and pursue a policy of peace. What would be a better iconic image than Lincoln delivering his Second Inaugural Address. 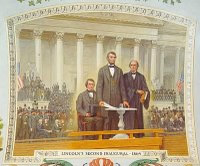 Although there is only one known photograph of the inauguration (see above), there are artists renderings that could be used to base a design. For example, the color image to the right of this paragraph was found on the Internet.

I do not know who created the image but it shows Lincoln standing at a lectern with Vice President Andrew Johnson (a southern Democrat) sitting behind Lincoln, and Chief Justice Salmon P. Chase standing to Lincoln’s left. It is a better image to use than what appeared on the cover of Harper’s Weekly because it shows a more dignified proceedings’ plus I think it would look better on a small coin, like the cent.

I think that this is a better idea than sheaths of wheat, shields, and images of the Capital building because it is clearly about Lincoln and how he lead the nation out of its bloodiest war into one United States.

If you agree with me, I encourage you to contact the US Mint, CFA, and CCAC to let them know. After all, it is our money, we should have more of a say in how it looks!!

I agree with you on this one. In addition, the the last rendition of the 2009 series poorly depicts Lincoln’s presidency. I do not get that one at all.

The last rendition Edward refers to may be found here:

A flag on the back? What were they thinking?

I think the best iconic symble this country has ever known, is the eagle. They may keep Lincolns portate on the obverse, a flying eagle on the reverse says it all.

In Lincoln’s own words he wanted “perpetual union” and that was his his greatest contribution to the nation. A fitting tribute for the 2010 reverse.

How about just bringing back the gold old fashioned wheat ears circa 1909-1958? This would bring a lot of old pennies back into circulation. Also, the mint should use cheaper metals to make the pennies. I liked the idea of copper coated steel pennies. If it will save taxpayer $$$, the mint should go for it.

How about the image of the IRS building on the reverse. Isn’t that what most Americans have in common… taxes?

It is time to “throw in” the stovepipe hat that Lincoln made famous during his presidency.
The enduring speeches, addresses and procamations that sprang from Lincoln’s head contributed much to the nation.The head that he often covered with a stovepipe hat. A hat that is said he used as a portable desk to store papers and write upon.The hat could set upon several documents,along side the hat his writing pen.The instruments representing Lincoln’s God given talent that he used to heal a divided country.