Available from the Perth Mint is a beautiful new colored collection of $1 coins to Celebrate Australia. This set contains 8 individual $1 coins, which are also available for purchase separately. 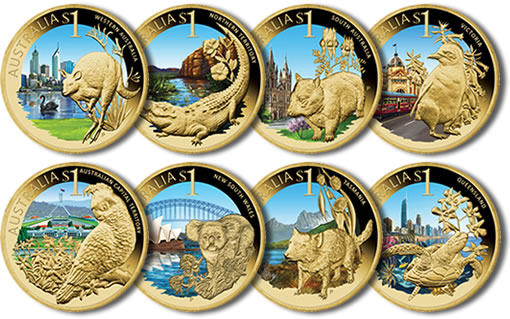 The coins are as unique as the lands of Australia they represent. With an area roughly equivalent to the continental portion of the United States, or 50% larger than Europe, it is not surprising Australia would contain a diverse collection of landscapes and scenery worthy of striking on coins.

Each of the Celebrate Australia coin’s designs represents a different state or mainland territory of Australia on its’ reverse. These reverses are colored to accent the exquisitely crafted images of wildlife or landmarks of each region.

The reverse designs and descriptions of the coins as provided by the Perth Mint are:

New South Wales – the coin’s reverse depicts a coloured composition of the Sydney Opera House and Harbour Bridge. The design includes images of a koala and Waratah, the floral emblem of New South Wales.

Victoria – the coin’s reverse depicts a coloured composition of Melbourne’s Flinders Street Station and an iconic tram. The design includes a Little Penguin, a star of the ‘Penguin Parade’ on Phillip Island, and Common Heath, Victoria’s floral emblem.

Queensland – the coin’s reverse depicts a coloured composition of the Gold Coast and a coral reef. The design includes a sea turtle, always popular with those visiting the Great Barrier Reef, and a Cooktown Orchid, Queensland’s floral emblem.

Tasmania – the coin’s reverse depicts a coloured composition of Cradle Mountain and the icy waters of Lake Dove. The design includes a Tasmanian Devil, the State faunal emblem, and the flowers of Tasmanian Bluegum, its floral emblem.

The obverse contains an image of Her Majesty Queen Elizabeth II, as portrayed by Ian Rank-Broadley. Also shown are the inscriptions “Elizabeth II”, “Australia” and “2009”.

Considered legal tender in Australia, the coins carry a face value of AUS $1. They weigh 13.3 grams with a diameter of 30.6 mm and a thickness of 3.1 mm.