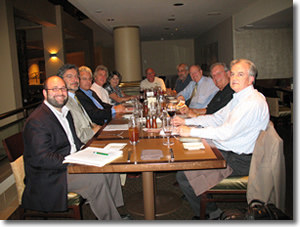 (Long Beach, California) – Leaders of five of the hobby and profession’s most influential organizations are launching a multi-pronged consumer awareness and protection campaign against counterfeit numismatic items sold and imported from China and elsewhere.

Representatives of the five groups participated in a preliminary teleconference call on May 7, 2009, and then met in Long Beach, California on May 27 to discuss a coordinated plan of action.  The groups recognize that counterfeiting can’t be completely stopped, but that efforts can be made to reduce the easy availability of fakes and to educate coin buyers about common sense ways to avoid unwittingly purchasing them.

They agreed to pursue a three-part strategy as a group and/or as individual organizations: initiate consumer education and protection programs including online resources to reach the casual coin-buying public who are not part of the mainstream numismatic community; aggressively attempt to compel online auction sites to be more responsive to complaints about fraudulent listings of fake certification services’ holders and replica coins that are in violation of The Hobby Protection Act; and utilize ICTA’s extensive experience in Washington, DC to explore possible criminal actions by federal law enforcement agencies against importers and sellers of illegal numismatic items.

First enacted in 1973 and amended in 1988, The Hobby Protection Act requires manufacturers and importers of imitation numismatic items to mark them plainly and permanently with the word, "COPY."

"There are numerous reports of replica coins being shipped from China without the word, "COPY," on them despite clearly showing that word on photos of those items when they were offered for sale," said ICTA Chairman Fred Weinberg.  "It’s the Wild West coming out of the Far East."

Certified Collectibles Group/NGC Vice President Scott Schechter and PCGS President Don Willis said both authentication services have purchased counterfeit coins and dies for study and to remove them from the market.  Both companies have been working to get fraudulent auction listings removed, but both also have seen an increase in the number of counterfeit coins being submitted to them.

NGC has started sending notices with returned counterfeits reminding submitters it is illegal to sell fakes or replicas that do not have the word "copy," and PCGS will send similar notification to submitters.

Both grading services urge coin buyers to use common sense by not making purchases at flea markets and pawn shops, but instead to only purchase coins from major, reputable auction firms and from NGC or PCGS authorized dealers because both services guarantee what’s in their holders.

Willis said on one recent day there were more than 7,300 coins listed on an online auction site that were identified as "copy" or "replica."  He added: "It’s kind of like the little Dutch boy trying to plug leaks.  We need to stop the imports."

PNG Immediate Past President Jeff Garrett expressed the group’s concern about the quality of some fakes entering the market:

"Until recently, the quality of the counterfeits seen was quite sub-standard.  Some of the fakes now are very good, and the collecting public should be very careful when considering uncertified material, regardless of the source. It is more important than ever before to purchase coins from reputable dealers who guarantee their merchandise.  PNG dealers offer lifetime guarantees of authenticity."

ANA President Barry Stuppler said: "To help the public protect themselves, the ANA will use its publications, web site and educational seminars to make our membership and the general public aware of counterfeit numismatic items and certified holders."

"While real progress is being made, we hope that our cooperative efforts will encourage other dealers and collectors to address counterfeits with greater diligence.  For example, a great and easy step is to notify grading services when coins in counterfeit holders appear in the marketplace so that appropriate action can be taken," said Schechter.

Representatives of the five organizations will meet again at the American Numismatic Association World’s Fair of Money® convention in Los Angeles in August.