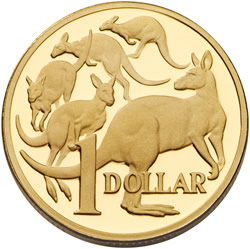 Australia’s first $1 coin turns 25 today and has become one of Australia’s most recognised coin designs.

In preparation for the currency changeover, from note to coin, a variety of coin designs and shapes were considered including a seven-sided coin and a scalloped edge coin.

"Stuart Devlin, the Queen’s appointed goldsmith and jeweller, was invited to submit designs for the new $1 coin. His proposals featured Australian native fauna including a wombat, a penguin and the famous five kangaroos which are still used today," said Graham Smith, Acting Chief Executive Officer of the Royal Australian Mint.

"The kangaroo is recognised all around the world as a symbol of Australia. It is fitting that the Royal Australian Mint is best known for its kangaroo design coins and that this 25 year old design has become one of the favourite designs on Australia’s coins," said Mr Smith.

What a beutiful coin this is! A wonderful followup to orginal design. When will this be availabe for purchase?

Were any copies of Devlin’s original $1 coin proposals minted? I would love to get a hold of the penguin, wombat and three kangaroos coins. If so, where would one find these, and how much could i expect to pay?

I Have one dollar australian 2008 elizabeth II i want to sell this coin, would it be possible? if it is how much would it be worth in Euros ?

I have a silver 1984 one dollar coin with the five kangaroos. It resembles the above coin but is sliver. I cannot find any reference to a silver dollar being minted in that year. Do you have any information about this coin? Thank you