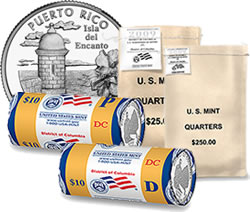 Puerto Rico quarter are selling at an exceptional pace, based on US Mint weekly sales reports and compared to prior quarter offerings.

With 2009 quarter production plummeting and no signals in sight for a reversal any time soon, there is little surprise as to why demand for the coins has peaked.

Registering lows that have not been seen in over 40 years, the 2009-P has a mintage of just 53.2 million and the 2009-D has a mintage of 86 million. The relative Puerto Rico quarter scarcity compared to prior quarters has driven demand (an attractive quarter design certainly is a bonus).

Interestingly, despite the fact that more quarters were produced in Denver, quarter sales have remained relatively even between the "P" and "D" offerings.

It is not just the economy that has pushed circulating quarter production to historic lows. A point collectors should remember in their coin "scarcity" analysis is the fact that there will be six quarters released in 2009 compared to recent years where five quarters were issued each year. For that reason alone, individual 2009 quarter mintage levels would naturally be lower than any of the prior state quarters.

The Mint will begin selling Guam quarter-dollars in bags and rolls on May 26. Collectors will be keen to discover the yet to be released mintage figures, as many are expecting even lower tallies.

[Editor’s update: The table of Puerto Rico sales was updated on May 27 to include the latest available Mint figures.]

I am one of those two-roll set orders in the ‘5-Apr’ column, and yet I have not received my order. The U.S. Mint site lists them, along with other two items I ordered, as “in stock and reserved”. At the 30-day mark, I plan on calling them up and seeing what is going on… I don’t want to cancel the order, for the exact reason you note in this article, but it is very frustrating to committed money to a purchase, and then be made to wait and wait.

Any information on the Puerto Rico quarters where the letters on the back of the quarters are upside down?