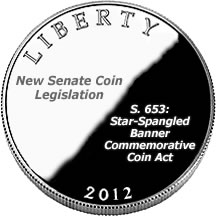 Gold and silver coins celebrating the bicentennial writing of the Star-Spangled Banner will be issued in 2012, should reintroduced legislation makes its way through Congress and find Presidential approval.

The Star-Spangled Banner Commemorative Coin Act, S. 653, would authorize the United States Mint to strike up to 100,000 $5 gold coins and a maximum of 500,000 silver dollars that are "emblematic of the War of 1812 and particularly the Battle for Baltimore that formed the basis for the Star-Spangled Banner."

The legislation is not new. Similar bills (minus the gold coin provisions) were brought before the Senate and House last year. The House version passed, but died in the Senate. Maryland U.S. Senators Benjamin Cardin and Barbara Mikulski, who jointly reintroduced the latest version, hope this year will be different.

"The War of 1812 is often referred to as the Second War of Independence and deserves broad, national recognition," said Senator Cardin. "As Marylanders, we are all proud of the role our state has played in our nation’s history and the creation of these commemorative coins will bring greater attention to this bicentennial celebration."

"I am proud to be from a state with such a rich heritage and culture as Maryland," added Senator Mikulski. "These coins will commemorate a day of great Maryland and national pride—the composition of our national anthem by Francis Scott Key at Ft. McHenry in Baltimore."

Surcharges for sales of each coins would be paid to the Maryland War of 1812 Bicentennial Commission for the purpose of supporting bicentennial activities.