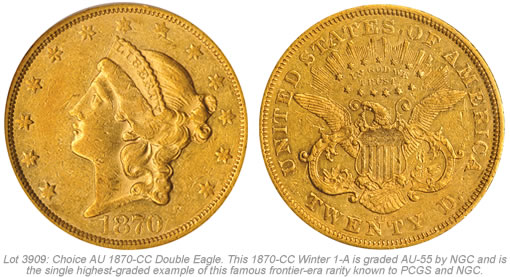 IRVINE, Calif. – Bowers and Merena Auctions, America’s leading rare coin and currency auction house, makes its first trip to Baltimore in 2009 for the Official Auction of the Baltimore Coin and Currency Convention set for March 24-28.

The auction is highlighted by two standout, multi-million-dollar collections. The Southerly Collection offers a variety of distinguished coins including a top-notch Choice AU 1870-CC Double Eagle as lot 3909. This 1870-CC Winter 1-A is graded AU-55 by NGC and is the single highest-graded example of this famous frontier-era rarity known to PCGS and NGC. 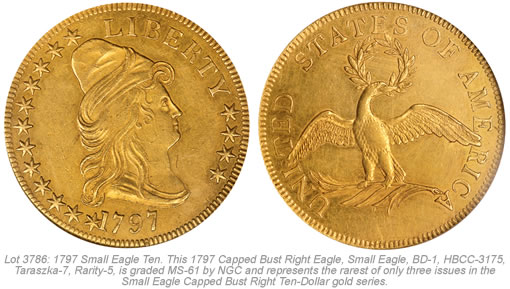 The Essex Collection of Morgan Dollars presents more than 100 breathtaking Morgans, topped off by lot 3328, a legendary 1892-S Morgan Dollar in Gem BU graded MS-66 by PCGS. With additional pedigree notes that include Heritage’s sale of the Gary Wolkwitz Collection in August 2001 (lot 6712), this is an extremely fortunate survivor of the extensive commercial use and widespread melting that claimed the vast majority of these coins.

Lot 3217 is a very rare near-Gem 1884-S Morgan Dollar graded MS-64 by PCGS that is solidly in the Condition Census for this issue, with a PCGS Population of just 13 and only three finer. Lot 3283 offers a near-Gem 1889-CC Silver Dollar, the rarest Carson City Mint Morgan.

"We are very pleased to present these two incredible collections in Baltimore along with more than 3,100 great coin and currency lots, right on the heels of our successful Portland ANA auction last week," said Steve Deeds, president of Bowers and Merena.

"Each collection offers a long list of impressive highlights that have already been drawing attention at shows where they have been on display. We are looking forward to some very spirited bidding throughout this auction."

Interested bidders are also encouraged to view lots in Baltimore March 24-27, 2009, and bid in-person at the live auction March 26-27, or live online through the Bowers and Merena website. A complete auction and lot viewing schedule is available at www.bowersandmerena.com or by calling 800.458.4646.

For more information about Bowers and Merena’s Official Auction of the Baltimore Coin and Currency Convention in March, call 800.458.4646. For media inquiries, ask for President Steve Deeds. Complete prices realized for all past auctions are available at www.bowersandmerena.com.