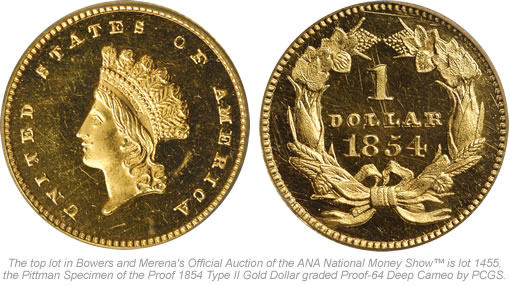 The top lot in Bowers and Merena’s Official Auction of the ANA National Money Show™ is lot 1455, the Pittman Specimen of the Proof 1854 Type II Gold Dollar graded Proof-64 Deep Cameo by PCGS, an extraordinary rarity in the U.S. gold coin series with just four specimens known to exist.

Two of the proof 1854 Type II Gold Dollars known are impounded in museum collections, and as such, only two specimens are available for private ownership, including this example being offered in Portland.

"This is one of the most rare and important proof gold offerings of all time from Bowers and Merena Auctions," said Steve Deeds, president. "The collector who purchases this lot will be joining a highly select group of numismatists.

Only a handful of collectors have ever had the opportunity to own a proof 1854 Type II Gold Dollar, and some notably absent from the list of previous owners of these coins are numismatic luminaries such as Louis E. Eliasberg, Sr., Floyd T. Starr, Ed Trompeter and Harry W. Bass, Jr. This is a very special coin and quite a pleasure to present it at our first official ANA auction of the year." 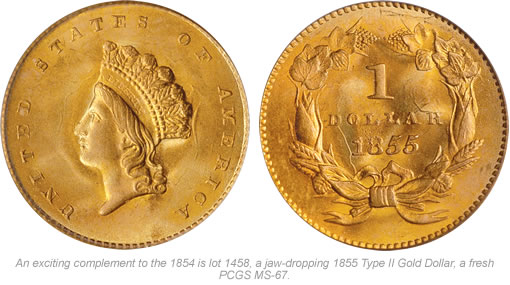 The coin offered in this lot – an example of the Philadelphia Mint’s 1855-dated delivery – ranks high in the Condition Census for not just the issue, but the type as a whole. In fact, this coin is tied with just three other 1855s and a mere two 1854s for highest-graded honors among Type II Gold Dollars that have been submitted to PCGS.

"This is a first-rate condition rarity, and a breathtakingly beautiful coin," said Deeds. "This piece would serve as a highlight in the finest numismatic cabinet, and to have both of these incredible Gold Dollars in the same auction is really unprecedented."

MS-66 by NGC and bearing the CAC designation, a technically sound and visually appealing Condition Census example of this key-date and low-mintage Double Eagle issue.

Lot 1427 Lot of (3) California Gold Rush Mementos from or Related to the S.S. Central America.

All lots and images in the Bowers and Merena Official Auction of the ANA National Money Show can be viewed online at www.bowersandmerena.com, and printed catalogs are available upon request by calling 800.458.4646.

Interested bidders are also encouraged to view lots in Portland March 11-13, 2009, and bid in-person at the live auction March 12-13, or live online through the Bowers and Merena website. A complete auction and lot viewing schedule is available at www.bowersandmerena.com or by calling 800.458.4646.

For more information about Bowers and Merena’s Official Auction of the ANA National Money Show in March, call 800.458.4646. For media inquiries, ask for President Steve Deeds. Complete prices realized for all past auctions are available at www.bowersandmerena.com.