Rare coin dealer Paul Hollis will commemorate the bicentennial of Abraham Lincoln’s birth and the 100th anniversary of the first Lincoln cent by giving away one million pennies — weighing 2.7 tons — throughout Louisiana. 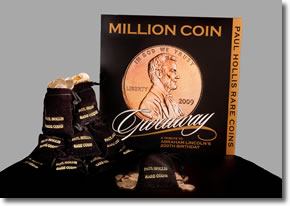 To commemorate the 200th anniversary of President Abraham Lincoln’s birth in 1809 and the 100th anniversary of the familiar Lincoln cent first issued in 1909, rare coin dealer Paul Hollis of Mandeville, Louisiana will give away a million Lincoln cents in public places throughout Louisiana between Lincoln’s birthday, February 12, and February 24 at the Argus Mardi Gras parade in New Orleans.

But it’s been harder than anticipated, and not just because the million one-cent denomination coins weigh about 5,500 pounds.

"I’ve been trying for weeks to arrange for delivery of a million of the new, 2009-dated Lincoln cents that are scheduled to be released on February 12.  Those would have the first of four new ‘tail’s’ side designs this year," said Hollis.

"Local bankers and the Federal Reserve Bank told me they don’t expect delivery of the new pennies for weeks or even months later until the current inventory of earlier-dated one-cent coins is reduced in Southern states.  So, I’ve made arrangements to get at least some new coins from banks in another part of the country, and ship them by armored car to the New Orleans area."

“Abraham Lincoln has always been one of my favorite Presidents and this is my small way of remembering his extraordinary legacy," explained Hollis.

In addition to those with new designs, some of the million pennies will be 50 to 90 year-old collectors’ coins with the original "wheat stalks" design on the tail’s side.

"I think the Lincoln penny is the most important coin," said Hollis. "It was the first time that a U.S. President was featured on a circulating United States coin, and it remains the longest running coin design in our country’s history."

According to the United States Mint, the four new designs on the reverse of the new pennies represent four major aspects of President Lincoln’s life: his birth and childhood in Kentucky; his formative years in Indiana where he worked as a rail splitter; his professional life in Illinois; and his Presidency in Washington, D.C.  It’s the first major change in the cent since the Lincoln Memorial design was introduced a half-century ago in 1959.

Hollis, 36, became a collector when he was six years old after receiving an old coin from his grandmother.

"Coins are an enduring legacy of history throughout the world.  You can own an original coin that was struck during the Civil War that costs less than you’d spend buying dinner.  How can anyone not get excited about that?"

The approximately 2.7 (US) tons of coins will be given away by Hollis a handful-at-a-time with specially-made cloth coin "purses" that will be accompanied by an illustrated, educational brochure he produced explaining the history of the Lincoln cent.

"How many people can say they gave away ‘tons of money’ and really mean it?  I think this is great," said Hollis.

For more information or to receive a complimentary brochure, please visit Paul Hollis Rare Coins online at www.PaulHollis.com, or call (800) 994-0689.

Paul Hollis has had a passion for rare coins that has spanned nearly three decades. Along with most numismatic scholars, Paul developed a passion for coins at a very early age after receiving a coin from his grandmother.

Paul has been instrumental in the trades of many of the world’s greatest coins such as the 1913 Liberty Nickel, the 1804 Dollar and the finest known 1907 Ultra High Relief Saint Gaudens. Each one of these exceptional rarities traded well in excess of a million dollars.

He is a graduate of the American Numismatic Association study program and has completed all of their training courses. Paul has been interviewed by national and international media and is considered to be an expert in treasure coins. Paul has also hosted "The Coin Vault" which is a nationally televised program on the Shop At Home Network broadcasting to over 60 million homes across the United States.

cool, I’m collecting and hoping for filling up 3 bozess of pennies, about 75 dollars.