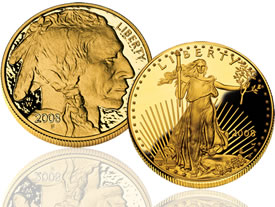 The United States Mint on Monday updated pricing across the board for their remaining 2008-dated American Buffalo Gold and American Eagle Gold coins.

The price changes were expected and in line with a January 7 notice where the Mint announced a new pricing policy that would adjust gold and platinum coin prices based primarily on the London Fix weekly average (covering the previous Thursday through Wednesday a.m. Fix).

The policy was introduced to "mitigate the effect that fluctuating gold and platinum commodity costs" has on coins, the Mint said. The new pricing mechanism is much more open as it contains tables of coin prices based on ranges of London Fix bullion prices. If the London Fix weekly average stays within a $50 range for gold and a $100 range for platinum, the collector coin prices would not be change. A penny beyond those thresholds in either direction kicks in a price adjustment.

The Mint last adjusted prices on November 13 when it resumed sales of many of its gold and platinum collector products. At that time, prices moved predominately lower and were closer to bullion prices.

To prepare for the price updates, the Mint suspended gold and platinum coin sale on Sunday and then resumed them early Monday morning. The new round of changes has resulted in substantial price increases for many of the remaining 2008 gold coins, as the tables indicate.

The London Fix is used as a price benchmark for immediate silver, gold and platinum delivery. The Monday AM fix for gold was $848.50 an ounce.