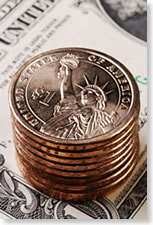 All modern $1 coins — from Presidential Dollars, to Sacagawea Golden Dollars, to the upcoming Native American $1 Coins — are now accepted and can be dispensed in Metro farecard vending machines.

Promoting the awareness and use of dollar coins is part of the Mint’s initiative to convince the public that coins are better, and cheaper to use than paper bills in every day transactions.

"We are excited about collaborating with Metro to increase circulation of $1 coins," Director Moy said. "Once the public realizes the benefits of using $1 coins, we are confident they will be motivated to use them more often."

According to the Mint, coins last 30 to 40 years and are reusable. It now says about one percent of old coins are recycled annually, which accounts for some 16 million in new coins every year. On the other hand, the Bureau of Engraving and Printing (BEP), which prints U.S. currency, says the life span of the average dollar bill is just 21 months.

Adding the Metro to the Mint’s list of active $1 coin supporters is a solid bonus, should consumers begin using them. The Metro operates the second largest subway system and the fifth largest bus network in the country.  It has more than 900 farecard vending machines in 86 Metrorail stations in suburban Maryland, Virginia and the District of Columbia.

Getting $1 coins integrated into the Metro system for the holiday season and before the upcoming presidential inauguration on January 20 is another boon.

However, whether the public in the Washington metro area will use $1 coins for other purposes is the big question. To date, the convenience of paper bills has greatly eclipsed most everyone’s inclination to spend or willingly receive heavier dollar coins.