The United States Mint on Friday helped to celebrate Native American Heritage Day by unveiling the design image for the new 2009 Sacagawea $1 coin, officially entitled the "Native American $1 Coin." The dollar will begin circulating in January along with the first 2009 Presidential $1 Coin. 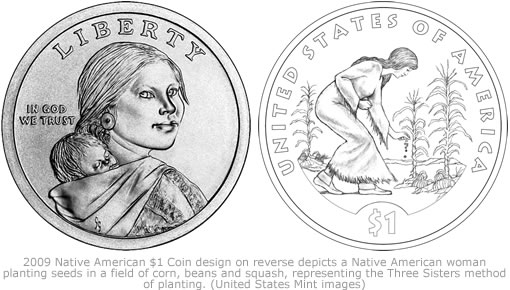 The coin features the same image of Sacagawea on the obverse, or "heads" side, which was first introduced in 2000. Sacagawea was a young Shoshone woman who accompanied Meriwether Lewis and William Clark on their historic expedition-by sculptor Glenna Goodacre.

"We are proud to produce the Native American $1 Coin," said United States Mint Director Ed Moy. "When Americans use this coin, we hope they reflect on the tremendous contributions Native Americans have made, and continue to make, to our Nation."

New $1 coins were authorized by Congress through the Native American $1 Coin Act, which was signed into law in September 2007. The act mandates a new design each year, and an equal representative 20 percent mintage like each of the four yearly Presidential $1 coins. Like these coins, the new Sacagawea’s also now has mandated edge-incused inscriptions.

While many collectors have become fond of the new Presidential $1 coins since their release in 2007, their use in daily transactions is an uncommon occurrence. Nearly 500 million of the coins will have been minted in 2008, compared to over 940 million in 2007.

The presidential coin series, like the Sacagawea and Susan B. Anthony dollar programs before, has failed against the popularity of dollar bills. If past tradition holds, the latest Native American $1 Coin is likely to be most appreciated by collectors, and rarely seen in cash registers.

Design of 2009 Sacagawea $1 Coin Design is similar to 1 Franc Coin of France!

HOW MANY 2009 SAWCAGAWEA GOLD DOLLARS WERE MINTED?

No one knows how many 2009 Sacagawea dollars have been minted. The year 2009 ends in December, which is when the U.S. Mint will stop making them. Then we’ll know.

Can anyone tell me why there is no year stamped into the 2009 coin? Will it be recognized only by the reverse design? Thanks.

The year is on the edge, the same as the Presidential dollars.

IMO taking the date off the obverse leaves the design unbalanced but no one asked me about the design ;=)

Thanks so much. I just bought one and it’s my first US coin purchase. I’m Canadian and have mainly Canadian coins from our mint. This Sacagawea coin is beautiful but I like the history behind it too.

WHAT A GREAT IDEA. TOO BAD SOME OF THIS INTEREST IN THE FIRST PEOPLE OF THIS NORTH AMERICAN CONTINENT DIDN’T MAKE MOST OF THE TEXTBOOKS WHEN WE WERE ALL GOING TO SCHOOL. THE GOVERNMENT SHOULD INVEST IN GETTING RID OF THAT SHAMEFUL STATUE IN HART PLAZA OF CADILLAC. THEN GO ONTO MOUNT RUSHMORE, AND BY THE WAY…DEFINE FOUNDING FATHERS.

I was given one as change and noticed it didn’t have a year Date and decided to do some research. Found this page. Not concerned about the date, but hey, is it a collector’s item based on the few amount minted or is it worth just a dollar?

IF you did your research (try starting at http://www.USMint.gov, for example) you’ll find the answers:

1) The date is on the edge, just like the Presidential dollars

2) Despite the general public’s unfamiliarity with the coin it’s a regular circulation issue and is worth exactly $1 if you got it in change or from a bank. It’s not really rare, just lower in mintage than other years. An uncirculated or proof one would be the only type to be worth any premium.

This edge lettering just seems like a fad and is difficult for even a well-sighted person to read. If the individual coins see any real circulation, won’t the edge lettering be quick to wear away? Not the most important issue in the world and I appreciate the effort to fit more artistic detail into the coins, however.

I found one of these coins on the floor and thought it was fake because there’s no year on the obverse. After a bit of research I know I have one of the 2009 coins. I am trying to determine if it is in my best interest to hold on to it for the future possibility that it might carry more value, or to just use it for the dollar it is supposedly currently worth.

Anyone have any thoughts on the matter?

With hundreds of millions being minted, there’s very little chance one you found on the floor (let alone got in change) will appreciate in value. Better to buy a nice uncirculated or proof coin, but even these won’t skyrocket because there are just too many of them.

If you happen to get an uncirculated or proof 2009 Native American, it might be worth around $10 if in good condition, and significantly more if in perfect condition. You can go to this page to get value information on this coin: