On January 10th, 2009, George Frederick Kolbe/Fine Numismatic Books will offer for sale at public auction the highlights of two outstanding numismatic libraries, both remarkable for their exceptionally fine overall condition.

They will be sold at the Waldorf Astoria Hotel in New York City in conjunction with the New York International Numismatic Convention. The first 72 page catalogue features 100 lots of rare and classic works on American numismatics, with some fifty full color illustrations. 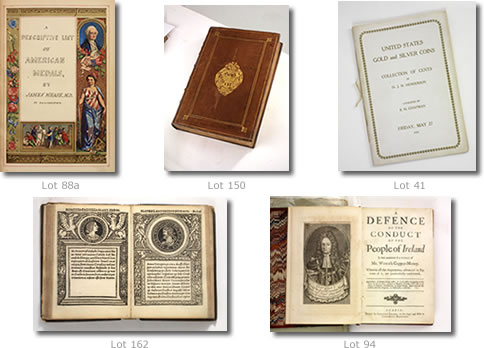 Lots 1 to 75 are from The Twinleaf Library and lots 76 to 100 are the property of several additional consignors. The second 108 page catalogue, with over one hundred full color illustrations, is comprised of 175 early printed numismatic books and classic titles on Italian coins and medals from the library of Dr. Ferdinando Bassoli of Turin, Italy.

Copies of either profusely illustrated catalogue may be obtained by sending $25.00 ($35.00 for the pair) to:

Robert Coulton Davis’s famous 1885-1887 articles on Pattern and Experimental Pieces of the United States Mint, heavily augmented and annotated by a major collector of the day, Harry Rogers, who remains largely unknown today;

A Large Paper Copy of Hickcox’s 1858 Historical Account of American Coinage, one of only three known;

The first two works on American Medals, by James Mease and J. Francis Fisher, from the library of Charles Bushnell, with his annotations and additions;

Jonathan Swift’s 1724 very rare Defence of the Conduct of the People of Ireland in Their Unanimous Refusal of Mr. Wood’s Copper-Money, from the Charles Ira Bushnell Library;

A fine 1888 Vicksburg I Sale With 12 exceptionally fine photographically-printed plates;

A Special Large Paper Edition, one of only twelve issued, of the 1865 J. N. T. Levick Cabinet auction sale, postponed due to the assassination of President Abraham Lincoln;

Some Bassoli Library highlights include: over thirty numismatic books printed before 1600;

A dozen superbly illustrated numismatic works by Enea Vico, including his first and second works, published in 1548 and 1553;

A very fine set of Corpus Nummorum Italicorum, including an original Volume XX, a gift from King Victor Emanuel’s son;