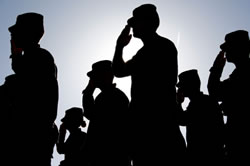 President Bush signed into law a bill directing the Treasury to mint 350,000 silver dollars in 2012 "emblematic of the courage, pride, sacrifice, sense of duty, and history of the U.S. Infantry." A surcharge of $10 per coin will help the National Infantry Foundation establish an endowment to support the maintenance of the National Infantry Museum and Soldier Center.

The U.S. Army infantry was established on June 14, 1775, when the Continental Congress ordered the formation of ten companies of riflemen. It is the oldest and largest branch of the Army. As many as 80 percent of all the servicemen and women who have died serving their country were part of the Infantry.

"For more than 200 years, our Infantry has defended our lives and our freedom, and no tribute can repay what these soldiers have given their fellow Americans … I’m humbled to play a role in shining a spotlight on these American heroes. The museum is a great attraction for Columbus and sales of this coin will go a long way toward its success in the future."

"From the siege of Boston in 1775, to San Juan Hill, to the Battle of New Orleans, to the Argonne Forest where Sergeant York distinguished himself, to the beaches of Normandy, they hunted the enemies in the Shua Valley, parachuted into Panama and currently subdue our enemies on cold mountainside and hot desert sands in both Iraq and Afghanistan," said Davis.

"This bi-partisan legislation honors the legacy of the United States Infantry with the minting of a commemorative coin … I urge my colleagues to support it," added Davis.

H.R. 3229 enjoyed strong bipartisan support with 290 cosponsors and passed the House on June 10 by a unanimous voice vote. The Senate then passed the bill on September 27 by Unanimous Consent. President Bush signed H.R. 3229 into law (Public Law No: 110-357) on October 8.

The full text of the legislation, congressional voting records and additional information may be found on the CoinNews page: H.R. 3229: National Infantry Museum and Soldier Center Commemorative Coin Act – Public Law No: 110-357.

Current coin bills under consideration or recently passed may be viewed on the CoinNews page: Coin Legislation, Acts and Laws.

How can you purchase the coin. Thank You.

Ret.1SG Braxton, How do I buy infantry soldier silver dollar. I was an infantryman for 23 years. Thank you, Dan.

The U.S Mint will offer the silver dollars beginning at noon ET on February 16, 2012.