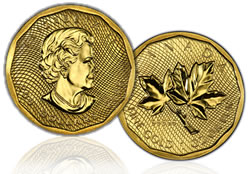 The Royal Canadian Mint has been able to sustain its inventory of gold coins, unlike the U.S.Mint, as physical demand for gold has surged in September due to volatile markets and financial uncertainty.

The Royal Canadian Mint has not turned away buyers this year. Nor has it plans to do so — to the contrary of reported market talk.

"Although we are facing growing demand, we can keep producing the coins to meet the demand as best we can," said Christine Aquino, Royal Canadian Mint spokeswoman.

Why are Canadian gold coins, like the Maple Leaf, still available to dealers when U.S. American Eagle and Buffalo coins have faced suspensions and allocations?

For one thing, the U.S. Mint relies on third party vendors to supply major materials, like coin blanks, in its manufacturing process. The Royal Canadian Mint does not, resulting in greater self-sufficiency.

"The mint controls the gold bullion manufacturing process from start to finish: we refine our own gold, roll our own strip, make our own blanks and strike our own coins," Aquino said.

Gold has gained about 20 percent since the collapse in the share price of Lehman Brothers on September 11. The yellow metal has long been considered a safe-haven for investors during times of economic stress and uncertainty, which has spurred gold’s physical demand.

London gold climbed 3.3 percent for the week, and closed to $902 an ounce on Friday.

Still Gold Maple Leaf Bullion Coins still availiable! It has been great year for gold bullion coins like Gold Buffalos and Gold Eagles Coins. The demand exceeded supply of these coins and made price to move higher!