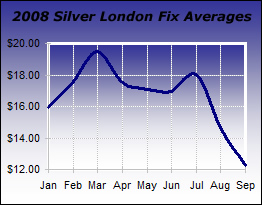 The Wall Street Journal reported the Commodity Futures Trading Commission (CFTC) confirmed Wednesday that there’s a new investigation into the silver market. Apparently, the CFTC has received numerous complaints that silver was in short supply — verified by reported visits to various coin shops, yet prices were manipulated lower by large investors. WSJ writes:

Silver investors have argued that a handful of U.S. banks have been controlling a large portion of silver’s short positions — or bets that prices will decline — on Comex division of the New York Mercantile Exchange. Official data from the CFTC showed that two U.S. banks had increased short positions in the silver futures market between July and August by 450% and controlled 25% of the total open interest.

On May 14, 2008, the CFTC released the results of a similar investigation and reported no evidence of manipulation. Then, the Division of Market Oversight concluded:


A CFTC statement noted they have received complaints for the past 25 years from "silver investors alleging that the price of silver futures traded on the NYMEX has been manipulated downward." And had concluded in 2004, which the May study builds on, that the "existence of a long-term manipulation was not plausible."

CoinNews.net - May 13, 2022 71
Precious metals split Friday with gold and platinum falling and silver and palladium rising, but they all posted very sharp weekly losses. Gold ended...