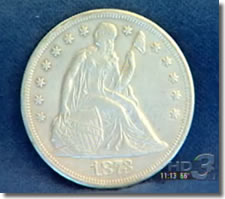 A 1873-CC Seated Liberty silver dollar may have saved a couple in Parma, Ohio from losing their home. According to WKYC-TV, the couple brought the extremely rare coin to Jim Matiach for an appraisal.

Matiach, President of Coin and Jewelry Buyers of America, had good news.

"We sat down and we were able to negotiate a price and he walked away with enough money to pay off some of his bills and hopefully be able to keep his house," says Matiach.

Only 2,300 of the Carson City Seated dollars were minted, and far fewer are believed to remain. Why the low mintage? In 1873, the Carson City Mint turned its attention toward producing newer silver coins called Trade dollars.

Even in lessor grades, a 1873-CC Seated Liberty silver dollar can be worth many thousands of dollars.

This coin looks fake to me.

I have an 1873 Silver coin, not sure which one, has an eagle on the back. on the otherside I couldn’t figure out who was holding the flag. It is well worn, my grandfather had given it to me. There is also a smooth hole, so someone must have worn this around their neck at one time.It also appears someone might of etched some writing on it. That coin must of been in excellent condition. I’m assuming mine, is from the road most traveled.

I have just purchased two 1873CC silver dollar coins on ebay.The coins are in fairly good condition,G4 I would say.
I am looking for information as to where would be the best place to sell my coins?
Regards
Craig

Craig, this is really a news site, not a values/sales site, but anyway first I should say that G4 is really the lowest collectible grade for a silver dollar of that vintage. You also didn’t say whether it was a Liberty Seated dollar or Trade dollar, which is critical in knowing its value. An 1873-CC Liberty Seated dollar graded G4 would retail in the $5000 range while a Trade dollar might only go for maybe $140 or so. If it’s the former, I would have suggested strongly against an eBay purchase unless the coin is certified and slabbed by a… Read more »

excuse me but what makes it g4 and what is that?

Sergio: Apologies, you got caught up in a discussion involving numismatic jargon. To explain, G4 is a grade describing the coin’s condition. G is the broad category (letter) and 4 is a specific subgrade (numeric). There are about a dozen letter grades: Poor and Fair are rarely used. Good is considered to be “just barely acceptable for collecting”, with heavy wear but all important details (date, mint mark) etc. visible. After G comes VG (Very Good), F (Fine), VF (Very Fine), XF or EF (Extremely fine), AU (Almost Uncirculated) and MS (Mint State). PF (Proof) is separate, for specially-struck proof… Read more »