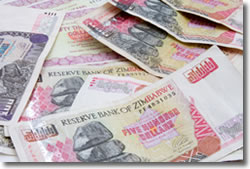 Just last week Zimbabwe released $100 billion notes in an attempt to fight inflation. But the new banknote on the day it hit the street wasn’t enough to buy a loaf of bread. Today, reports say it will take $200 billion to buy that loaf, and $600 billion to buy a can of Coke.

While Americans may be feeling an increased change in the value of its dollar due to inflation (see inflation calculator for examples), it’s nothing compared to the Zimbabwe 2,200,000% inflation rate.

It’s the world’s highest, and in an attempt to change that, Zimbabwe will now slash ten zeros from currency, making $10 billion a revalued one dollar.

“The Zimbabwe dollar will be redenominated by a factor of one to 10, which means we are removing 10 zeros from our monetary value. Ten billion dollars today will be reduced to one dollar with effective from August 1,” said Gideon Gono, the Central Bank governor.

The revalued money will enable cash-machines to electronically make change and the return of coins in everyday transactions. It will also mean new or "updated" banknotes and coins in the following denominations:

The new money is scheduled to become effective August 1, along with new bank cash withdraw limits. Individuals will be able to withdraw $2 trillion or $200 revalued on a daily basis. That is actually a twenty-fold increase from the last recent increase.

Without a change to the fundamental problems causing inflation, experts predict zeros could soon shift the other way again. More banknotes may be on the horizon.

The revaluation of Zimbabwean Dollar could bring back coins to circulation. It also means that Zimbabwe might issue Commemorative Coins and Proof and Mint Sets for coin collectors. By revalueing $10,000,000,000 to $1 Zimbabwean will bring down inflation is the question? In any case once again Zimbabwe will issue Proof Coin Sets, Mint Sets, and Commemorative Coins.