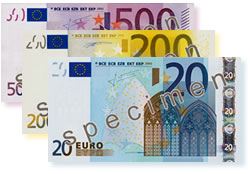 The European Central Bank (ECB) reported an increase in counterfeit activity for the first half of 2008, which is on the heals of 2007’s latter half increase. 312,000 fake banknotes were removed from circulation representing an increase of 5.4 percent.

The ECB noted counterfeit banknotes increased since the second half of 2007 by 5.7 percent. However, they went on to say:

"When the figures…are compared with the number of genuine euro banknotes in circulation (on average 11.5 billion during the first half of 2008), the quantity of counterfeits is very small indeed.

Excluding 2007, the trend has been a reduction in fake notes during a year’s second half. Should that happen, total counterfeits in 2008 could decreased compared to previous years. However, that would appear unlikely given this year’s already high numbers.

The 50 euro was the most counterfeited note followed by the €20 and €100. The other denominations accounted for less than 10 percent of the total.

All but 2% of the recovered banknotes this year have been in euro area countries. While the reported fake notes may seem high, compared to ECB figures showing euro notes in circulation, the numbers are less daunting.

Euro Banknotes Circulating since 31 May 2008

About the European Central Bank

The ECB is the central bank for Europe’s single currency, the euro. 15 European Union countries have introduced the euro since 1999.